Gabe was a Minister and is the G.S. Yates who performed many marriages in Pope Co., Arkansas.  John served three years in the Confederate Army. It was told that when John went to war, he got Gabriel to promise to take care of his family if he didn’t come back. Gabriel's wife, Rebecca, had died before this time.   On the way home John was bushwacked by Yankees and hung.

Sarah then married Gabriel Yates in 1865 in Arkansas. Gabriel served in the Mexican War and Sarah received a pension for that service. This is listed in “an Index to Mexican War Pension Applications” transcribed by Barbara Schull Wolfe as Gabriele S & Sarah, Ark, 8/1/1888, C6383.

The 1880 US Census states that Gabriel was 59 years old and living in North Fork, Pope County, Arkansas. His occupation was a Minister. He was married to Sally Yates, age 44; John P. Yates age 13; Abraham age 12; Sarah E. age 11; Polley K. age 6; and E.M. age 16.
Sarah died on November 2, 1895 and is buried in the Fairlawn Cemetery, Comanche, Stephens County, Oklahoma. Gabriel died on December 14, 1881 and is buried in Jones Cemetery, Pope County, Arkansas.

Children of John Yates and Sarah Holmes are: 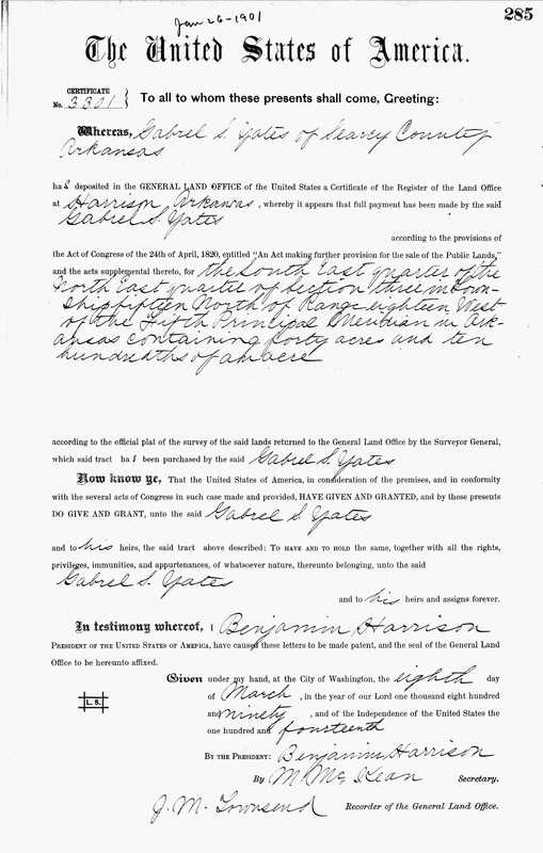