The Final Accounting of Benjamin Denton names Mary Denton as his daughter and she was married to James Holmes. (View this document by clicking here - Benjamin)

The following was provided by another Holmes/Denton researcher:
Two pieces of evidence have been located which identify Mary Denton Holmes as having Denton for her maiden name. The first was a court record of Perry Co., TN, in 1834, concerning the trial of Christopher and James Denton. They were being tried for stealing property valued at $4.00. James was convicted and sent to two years at the TN State Prison.  Christopher was found not guilty.

The second evidence of Mary Denton marrying James Holmes was found in a copy of a letter written by Benjamin Franklin Denton, born 1836, Perry Co., TN, to M. Denton, about Perry County Denton's genealogy. Benjamin mentions, among other information, that Mary Denton, who md. James Holmes of Perry County was a sister to Benjamin's father, Samuel.  He further said that Benjamin Denton & Peggy Ann Anderson Denton, were the parents of his father.  He then mentions that his father's grandfather was also named Benjamin, whose father was Samuel Denton born in Virginia.  Benjamin also said that his father, Samuel, was born in White Co., TN abt 1801 and about 1812 the Dentons all moved to Hickman Co., TN; then on to Perry Co. about 1817.  Many Dentons settled along Cedar Creek and many are still living there in 1894 (time of Benjamin's letter.)  . Benjamin also said in his letter that his grandfather was the father of our Mary.  Benjamin Denton moved on to Marshall Co., MS and died there about 1848.  He also mentions that Mary Denton, his aunt, had one son also named Benjamin and several girls; and James Holmes moved on to AR when he was a small boy.

A study of the 1840 Perry County Federal Census, as well as the 1850 Van Buren Co., AR Census supports most of the information given in Benjamin Denton's letter
.
Christopher Denton, bro. to our Mary, and his wife Elizabeth Ann Holmes, moved to AR and lived in Van Buren Co. near our Holmes family and that Christopher was killed by bushwhackers or carpet baggers and that some older people remembered that the "women folks" in the family had buried him secretly at night, but I don't know why they found it necessary to do it secretly, unless they also feared for their own lives.

Heirs that are named in James Will:
Caroline Winters
Benjamin Holms
Elisebeth Cash
Jane Burness
Winney Arthur
Sarah Yates
Rebecca Braudaway
Mary Bell
?eby Bell & Benjamin P. Parker
Rebecca Polk??, James Ruff
James Watts
Received Dec the 30 1887 of Enoch M. Bell ??? ??? of the estate of James Holmes deceased the sum of 20.05 the same being in full payment and satisfaction of my distribution share in said estate and in full of all claims against him as usch administrator.  Signed by J. K. Braudway and Rebecca Braudaway

State of Ark, Pope Co May the 4 1887 received of Enice Bell the administrator of my grandfathers state five dollars being my part of the personal property. Signed by E. H. Winters and Caroline Winters

Received Aug the 31 1887 of E.M. Bell as admrs of the estate of James Holmes deceased the sum of five dollars. The same being in full payment and satisfaction of my distributive share in said estate and in full of all claims against him as such dministrator. Signed J.C. Polk and B.J. Polk

Pope County Arkansas March the 19 188?. Received of E Bell
Administrator of the estate of James Holmes deceased the sum of 20.05 in full to date. Signed J.R. Parker guardian of B.P. Parker

Received July the 27 1887 of E.M. Bell as admrs of the estate of James
Holmes deceased the sum of five dollars. The same being in full payment and satisfaction of my distributive share in said estate and in full of all claims against him as such administrator. Signed ?M B Watts and Mary ? Watts
Enoch Bell the administrator was apparently Mary Bell's husband.
According to the gravestone in Smyrna Cemetery transcribed by the Tripps in 1970

Children of James and Mary: 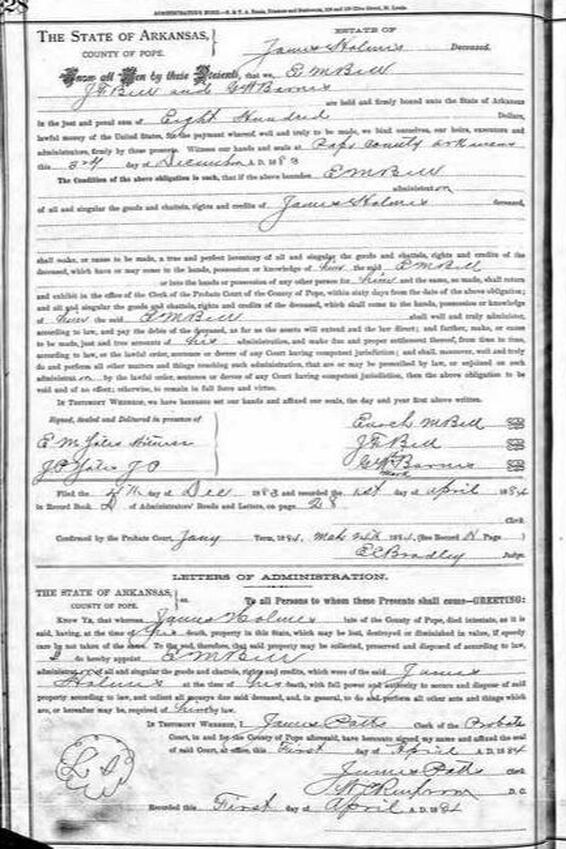 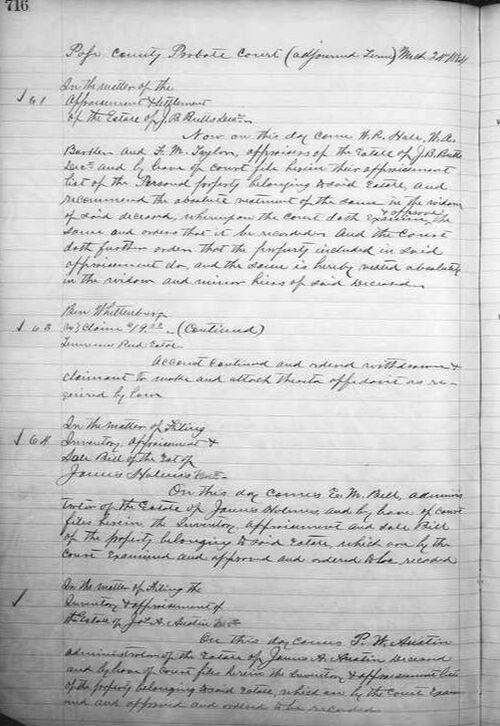 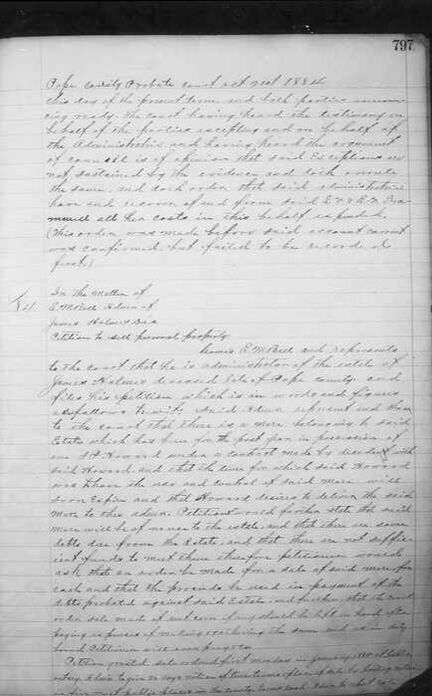 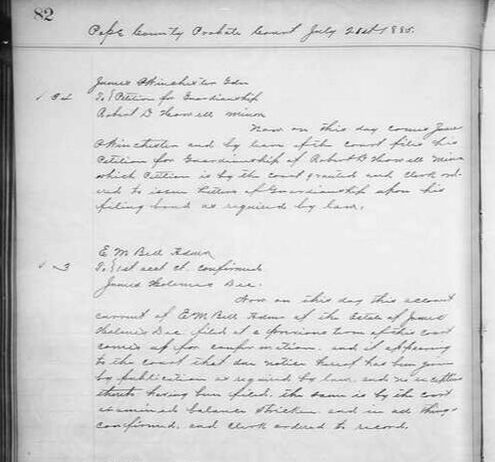 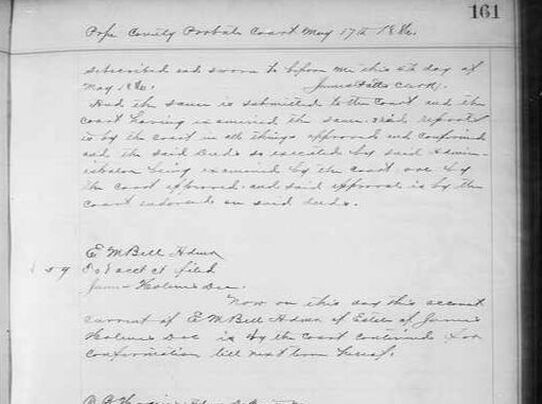 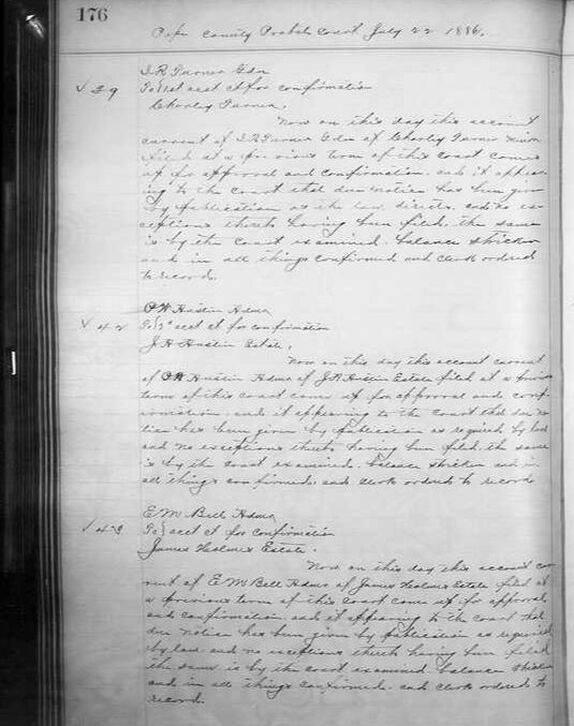 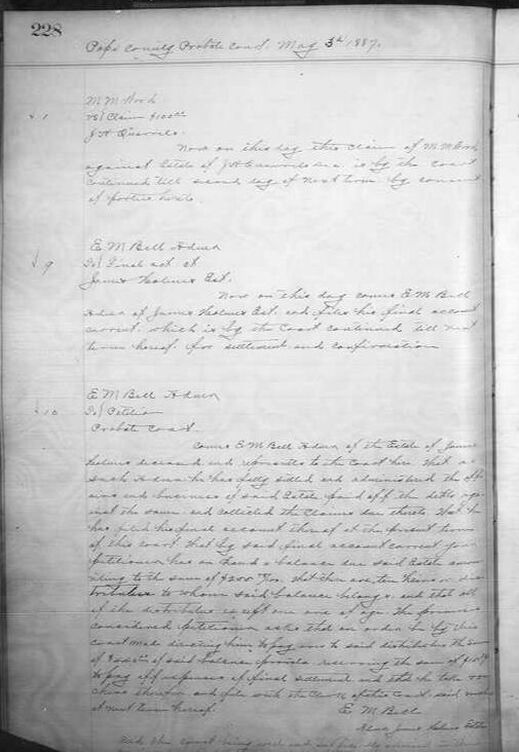 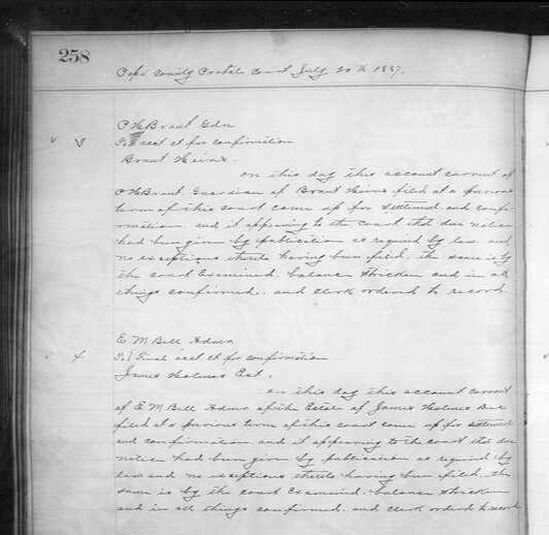