Johann Philip Beck
(1741 - May 1817)
​
Catherine
Philip Beck was born about 1741 in Germany. Johann came from Germany in 1750 aboard the ship Phoenix with his parents. Philip moved with his father, wife, and son to Rowan (now Davidson) County between 1766 and 1768. He lived in Hereford Township, Berks County, Pennsylvania, in 1758; he paid taxes there from 1762 to 1767 and about 1763 he married Catherine (surname unknown.) They moved to Rowan County, North Carolina, where he paid taxes in 1768. He was appointed a road overseer on February 7, 1773, and later was a constable. On August 7, 1787, he was granted a license to operate an ordinary (which in 17th century language was an innkeeper).

There are some reports that I feel are erroneous, which is that Philip was a Tory sympathizer, but on August 6, 1778, he was given permission to take the oath of allegiance to North Carolina; on August 8 the court reported that he had not taken it. He was not the only one who did not officially take the oath of allegiance.  Philip’s military service during the Revolutionary War has been documented with the Daughters of the American Revolution and his DAR number is A133574. The DAR lists his service as being a Constable of Rowan County, North Carolina in 1780.

Rowan County, NC - Will Book G:473 - May Session 1817 -: In the name of God, Amen. I, Philip Beck, being very sick and weak in body, but thank God of perfect mind and memory, knowing that it is appointed for all men once to die, do make and ordain this my Last Will and Testament in the manner and form following:

To wit, Principally and first of all, I recommend my Soul into the hands fo Almighty God, who gave it, and my body to the dust to be buried in decent Christian burial at the discretion of my executors, nothing doubting, but I shall recieve the same again at the day of resurrection.

Secondly, I give and bequeath unto my beloved Wife Catherine Beck my bed and furniture and my cow, and an equal part of all my other personal estate, with all my children.

Thirdly, My will is that my Executor sell my tract of forty acres of land, and divide the price thereof equally amongst the persons following: To wit, George Beck, Henry Beck, Adam Beck, and Dewalt Beck.

Fourthly, My will is further that all my estate not above bequeathed be disposed of by my Executor and equally be divided amongst all my heirs or distributees: To wit, Caty Swicegood, Philip Beck, Jacob Beck, Peter Beck, Peggy Gobble, Barbara Cope, John Beck, George Beck, Adam Beck, Henry Beck, Dewalt Beck and my beloved wife Catherine, above named.

Fifthly and lastly, I do appoint my trusty and beloved friend Benjamin Sherwood my Esecutor to this my Last Will and Testament, in testimony whereof I have hereunto set my hand and seal the first day of March in the year of our Lord, one thousand eight hundred and seventeen.

His Philip F.B. Beck (SEAL) Mark Signed, sealed, pronounced, and declared to be the Last Will and Testament of Philip Beck, who at his request and in his presence hath subscribed our names as witnesses to the same. Test, Abraham Barnes Shadrack Hill John Young Source: - November 1998

Phillip and Catherine’s children are: 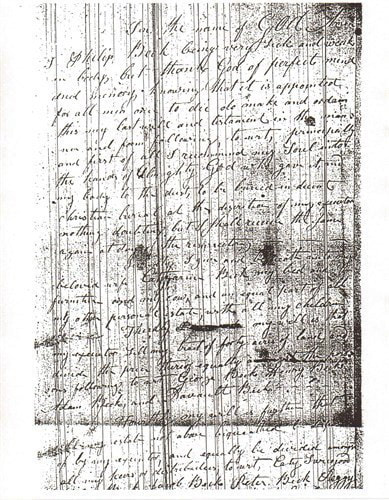 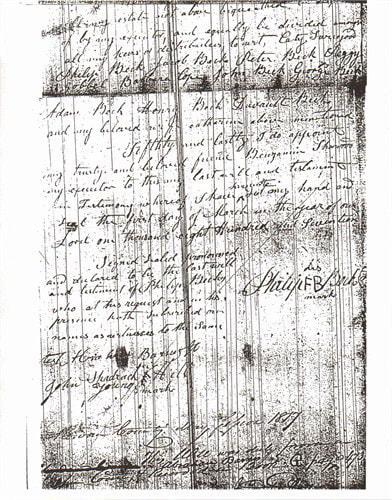 Handwritten Will, pages 1 and 2 of Phillip Beck
Sources:
LINN, ABSTRACTS OF THE MINS OF THE COURT OF PLEAS & QRTR SESSIONS, VOL 3, P 61
Daughters of the American Revolution (DAR), URL: https://services.dar.org/Public/DAR_Research/search_adb/?action=full&p_id=A133574
"Historic Sketch of the Reformed Church in North Carolina" by A Board of Editors Under the Classis of North Carolina. Philadelphia; 1908.
Wills and Estates of Records Rowan County, North Carolina Tax Lists of 1759-1778, pg 2

Click on arrow to go to the main Beck Family page