Moses Teague
(1718 - August 1799)
​
Elizabeth Loftin
(January 01, 1713/14 – Unk.)
Moses was born in 1718, in St. Annes Parish, Cecil County, Maryland. He was the son of William Teague and Isabella Loftin. Moses married Elizabeth Loftin in 1738 in Maryland. Elizabeth was the daughter of Thomas and Eleanor Loftin and was born on January 1, 1713 or 1714. Moses married second, Rachel Taylor, a daughter of Samuel and Rachel Taylor according to the Will of Samuel Taylor dated November 2, 1760.

Moses is listed in Revolutionary Patriots (pp3-31) as a Private Soldier from North Carolina and supplied supplies to the militia. He served jury duty on October 20, 1758; Salisbury, Rowan County for November Superior Court and in 1778; listed as non-juror in Captain Davis' District, property of 520 pounds.

On April 4, 1768 at a meeting of the Regulators, it was decided to hold a general meeting on the first Monday of July, October, January and April at a meeting house near Moses Teague.

Moses died in August 1799 in Chatham County, North Carolina.  Moses’ Will was dated March 31, 1787 and is recorded in Will Book B, page B180, Chatham County, North Carolina. Witness: John Timberlake, Esq. It was probated in 1799. An inventory of his estate was valued at 40-1-6 (which is pound-pence-shilling in British currency) and entered into court records on August 6, 1772 page 61 of Abstract of Minutes, Court Pleas & Sessions, Vol. 3,


Children of Moses and Elizabeth:

Children of Moses and Rachel:

March 31st, 1786
In the name of God Amen. I Moses Teague of Chatham County and State of
North Carolina being weak and crazy in body but in perfect mind and
memory, thanks be to God. And calling to mind the mortality of my body
and knowing that it is appointed for all me to die. Do make and ordain
this my last will and Testament, which is to say first and principally
of all I give and recommend my soul to God that gave it and my body I
recommend to the Earth to burial in decent and Christian manner at the
discretion of my Executors hereafter named, and as touching such
earthly? estate as it hath pleased God to bless me with my life I desire
and dispose of the same in the manner and form following.
Item. I give and bequeath to my loving wife Rachael Teague one feather
bed and furniture and all the pewter there is, one pot one little Chest?
and one large. Ditto two cows and Calves one horse, saddle and Bridle
which Horse she shall choose. One plow crop? and guns, my negro man
Abraham, as long as she lives. And her third of what shall remain of my
Estate. I give and bequeath to my son David Teague the land I now live
on and after his mothers death my negro man Abraham . I give and
bequeath to my children, Moses, Liga (Elijah?), Isabel Willborn?,
Abraham Teague, Isaac Teague, Jacob Teague, William Teague, Elizabeth
Johnston, Susannah Marley, Hannah Horniday, David Teague, and
Charrint/Chaerint? Ray, the rest of my Estate after the afore mentioned
legacy to my Wife, Rachael and my son David is taken out to be equally
divided amongst them. I whereby utterly disallow and make void all other
Wills or Testaments heretofore made by me proclaiming this and this
alone to be my last Will and Testament. And I do hereby nominate
constitute and appoint my wife Rachael Teague and David Teague Executors
of this my last Will and Testament in witness whereof I have set my hand
and seal the year and date first above written.
Moses Teague   {Seal}
Test.
Jacob Teague
Proved by Jacob Teague at Aug. Court 1799 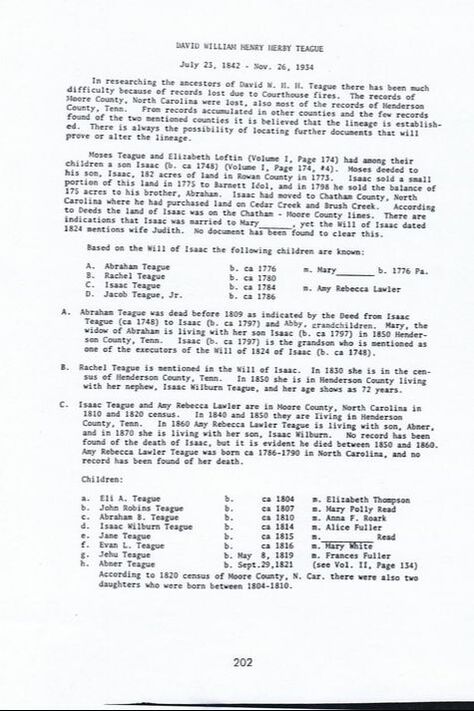 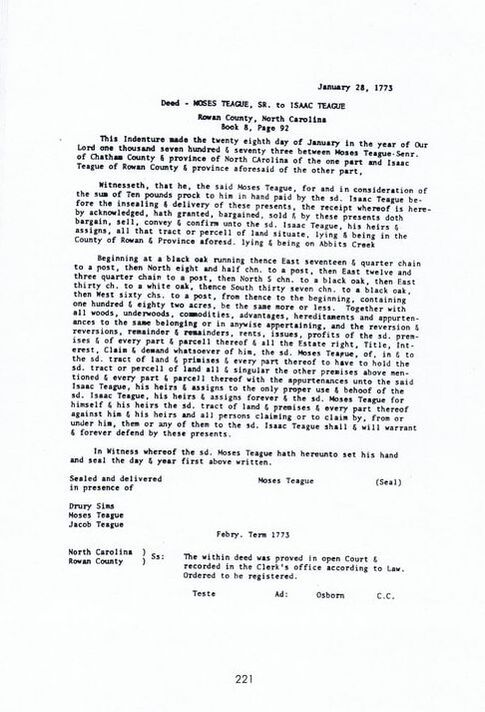 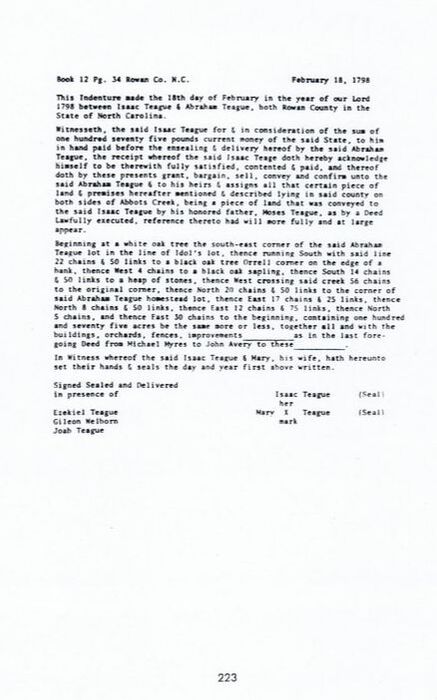