Jasper owned several businesses in Lexington, Tennessee, a livery and stable, a saloon, and a liquor store. Jasper held the office of county trustee for Henderson County, Tennessee in the 1870's. He served as Sheriff of Henderson County from 1865-1866.

​​Jasper and Mary moved to Lamar County, Texas by 1880.  By the 1890 census he lived near Oak Grove, Texas and complained of rheumatism in his right shoulder and hip.    Jasper was made Postmaster of Oak Grove, Texas (near DeKalb) in 1898.  He died on February 5, 1922 and is buried in the Oak Grove Cemetery in Bowie County, Texas.
MILITARY RECORD

TEAGUE, JASPER N, Co A, corporal/sergeant, enlisted for 3 years and mustered in on 9/8/62 in Jackson, TN at age 25.  He furnished his own horse and equipment and received a $100 bounty for enlistment.  Probably not captured with the regiment at Trenton, TN, he was one of the 100 or more men of the detachment of the 7th Tennessee who went AWOL from the forts on the Mississippi/Tennessee line in June 1863.  He left on 6/20/63 but returned to duty at some point and was promoted to sergeant on 2/1/64.  Presumed captured with the regiment at Union City, TN on 3/24/64, he was imprisoned in Andersonville in Georgia and other eastern prisons.  Paroled through North East Ferry (Wilmington, NC) on 2/28/65 he went to College Green Barracks in Maryland, then Camp Chase, OH.  Teague mustered out as a Sergeant at Nashville, TN on 8/7/65 when the regiment disbanded.

Jasper served with the 7th Cavalry along with his brother, Leander and cousin. Jasper applied for an invalid pension in 1885. ​Mary received a widow’s pension.


The history of the 7th Cavalry can be read at:  7th Tenneessee Volunteer Cavalry
​
NEWSPAPER ARTICLES - Lexington, Tennessee
These articles were found in the book "W.V. Barry's Lexington Progress 1884-1946", Brenda Kirk Fiddler, Editor

After the Civil War, ending in 1865, the Southwest side of the Public Square of Lexington, now beginning with the Edwards Building at the South corner and ending with the Council Block on the West corner and across what used to be called Purdy Street, was called "Grocery Row," from the fact that most of the space was occupied by houses called 'groceries'--and groceries in those days included whiskey--and whisky in those days meant the real product of corn, honestly distilled and not a vile concoction of sugar, cornmeal, etc., made these days by men who have no regard for human life--and consumed and sold by men who have no regard for human souls.
According to my historian, Esq. W. T. Threadgill, that side of the Public Square of Lexington began on the present North corner of the Boswell lot and was occupied by the blacksmith shop of the late Carter Madison, while the other corner of the Boswell lot, now the site of the brick house built by the late E. Frank Boswell, was then the home of the late Major Tom Smith (father of our present citizen and retired rural mail carrier, Tom B. Smith). The present open space between the Boswell lot and the Edwards lot is a part of the original plat of Lexington, and after it came the Moffitt livery stable run by the late James Moffitt, who died in Jackson. I have heard it told that Mr. Moffitt presented a bill to a certain citizen for use of a horse and the fellow said, "Who the hell ever heard of charging a fellow for a horse to go to mill." But in this statement I have gone too fast and jumped some buildings, for I learn that the first building after the open space was the Kizer drugstore and after that a house that stood vacant during the war, vacated by Wash (G.W.) Smith, who went to Decaturville and for many years was a merchant there, beside having a mill, known as the Dixie Mill, on Beech River about five miles from Decaturville--in fact "Uncle Wash" Smith and his son Reuben, were in business there when I went to Decaturville in 1881. Blount Jones vacated the next house at about the same time. Then came the Moffitt stable I first mentioned by mistake, then the present alley between Wadley's store and the Council Block. First after the alley came Ike Hall's inn or tavern and of course a liquor bar with it, a two-story brick, all the houses on the other side of the alley being of wood. Ike Hall was in sympathy with the Federals and his house was designated as the place where citizens must deposit all fire arms. This was the same building that had been run as a tavern by Mills Darden, who, before his death was said to have been the largest man in the United States, who died in 1857 if I am not mistaken and, whose grave is in sight of the railroad a few miles West from the Public Square. The corner lot now occupied by the W.A. Lawler drug store was a two-story before the war. This house was vacated during the war and reopened in 1866 by the same men. The two-story brick, which was on that corner when I came to Lexington in March 1884, was built by the late W.C. McHaney and burned while occupied as a grocery store by a man named Middleton.
Just after the War, the Wash Smith house, I mentioned before, was occupied as a saloon by Jasper N. Teague and "Cap" Reed, and in the Blount Jones house J.N. and "R" Teague (father of Will and "Sooner") dispensed spiritus frumenti.
​
The Teague and Reed Saloon owned by Jasper and Cap Reed was located at #28, actual address was 54 South Main Street.  Jasper and his father's business, J.N. and R. Teague Liquor Store, was located next door at 52 South Main Street.

​"The Lexington Reporter", January 21, 1876:
In the Livery Stable Business AGAIN:
The undersigned has this day gone into the Livery Stable business again in the stable on the North-East Corner of the Square, Lexington, Tenn., in the stable formerly occupied by Mr. James Moffitt, but better known as the Rhodes' corner. I will keep a good feed, livery and sale stable. Board per Day - $1.00; Single feed - 40c, and will hire horses as Cheap as any Person. Stock well cleaned and watered. I will not have room for hitching stock on public days until further preparations are made, which will be as soon as possible.
Call and try me, and if not pleased try somewhere else.--Jasper N. Teague
The following article was published in "The Tennessean" newspaper on Saturday, August 27, 1870.It not only lists Jasper's participation in the General County Convention, but other family members as well.

Jasper's Obituary published in "The Lexington (Tennessee) Progress", February 16, 1923
Jasper N. Teague Dies in Texas
Jasper N. Teague, who was born, reared and married in Henderson County and moved to Texas many years ago, died Feb. 5th, at Oak Grove, Texas, at the age of 86 years and four months.

Jasper Teague was a son of Robin and Polly Teague, of this county and married a Miss Burkett, daugher of Billie Burkett, also of this county. Back in the seventies of the last century, Mr. Teague lived in Lexington and ran a hotel on the site of the present First Baptist church. From best information we can get, Mr. Teague sold this hotel property to R.W. Stewart in 1882 and moved to Texas. Mr. Teague’s daughter, Mollie married J.L Florence, of Benton County. Florence moved to Lexington and died here in 1882. J.N. Teague was a brother of the late W.V. Teague and L.A. Teague (“R”) Teague, twin brothers, who spent their lives in this county. J.N. Teague is survived by a son, J. N. Junior, at Marshall, Texas, a daughter at Ardmore, Oklahoma, a daughter at Vincent, Texas, and a son at Houston, Texas. The news of the death of the man who had read the Lexington Progress for perhaps all of the thirty-nine years of its existence, comes from his son, Jasper N., Junior, who also told us that his father was a member of the Masonic fraternity and that he was buried with Masonic honors. 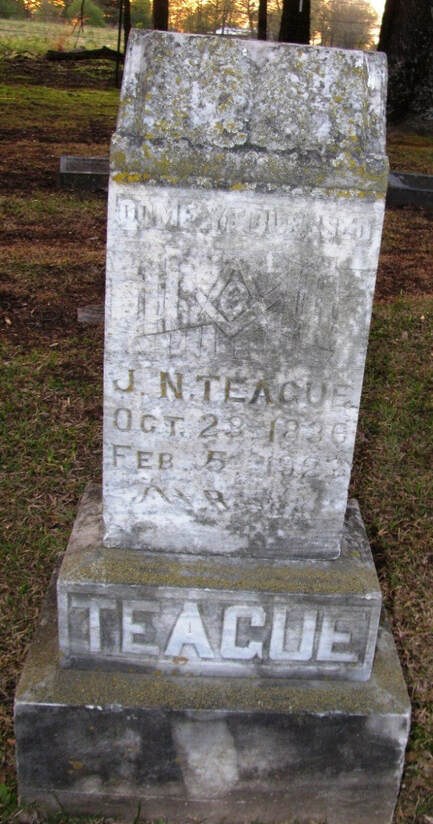