Edward Teague
(1660 – March 9, 1697)
The spelling of the name Teague as well as other names in the early days of this country varied considerably from time to time and place to place as such spelling was based on the pronunciation and the possible guess of the recorder of these documents. In some instances the person knew the correct spelling of the name, but as the educational level of the early settlers was considerably limited because of an almost non-existent schooling available; many of the settlers were not able to read or write.

Edward, son of John Teague, was born in 1660 in Bristol, England and died on March 9, 1697 in Cecil County, Maryland. He married Susan about 1689. Edward immigrated from England to Maryland in 1675. He is listed in the book "Early Settlers of Maryland," on page 456. Edward is buried in the St Mary Annes Episcopal Church cemetery Cecil County, Maryland.

Edward Tegg’s name was transcribed in the records in 1675 as Teage, in 1695 as Tegg, and was corrected by his son William Teague in 1714, even though William was unable to sign his own name, but it is evident he knew how to spell it.
The earliest known record located on Edward Teague is contained in the Hall of Records in Annapolis, Maryland in the "Index to Early Settlers" (1630-1680). Volume 2. This reads as follows:
June 8, 1675
"‘ Eodem Die (this day) Thomas Jones proved his right to two hundred and fifty acres of land for transporting himself, Edward Teage, John Edmonds,Sr., Rebecca Edmonds, John Edmonds, Jr. into this Province to inhabit".

Edward Teage, as a boy was transported into Maryland by Thomas Jones; June 8, 1675. According to the Index to early settlers 1630-80, Vol. 2. Thomas Jones was an Indian Trader in Maryland, St. Mary's County, Maryland. Three years before he received land to inhabit. Edward Tegg in 1695 received 290 acres of patent land in Cecil Co. Maryland: (recorded in the land office in Annapolis, Md.)
A little background on Thomas Jones:

On April 20, 1672, Thomas Jones of St. Mary's County, merchant, had been commissioned sole Indian trader within the Province, and had also been given the right to seize anyone else attempting to trade. In June of that year he was commissioned captain of the military forces of the recently-created Worcester County. That same summer, Jones, who was sheriff of Somerset County, too, was commissioned collector of Somerset, as his predecessor had been. He was to enter and clear all undecked vessels entering Somerset, and to take the necessary bonds. He was also one of the justices for Worcester County.

​Edward Teague's step-mother, Elizabeth Purcell, gave Edward to Thomas Jones to serve as a servant after Edward's father, John Teague's death.
Tegg's Delight, the home of Edward Teague, was located in the far northwest corner of Cecil County, MD on the northwest bank of Conowingo Creek. Conowingo Creek flows into the Susquehanna River about 2 miles south of the PA (Mason-Dixon) line. The most likely location is about 1½ miles upstream from the confluence with the river. This location is about 300 yards south of the Pilot Town Road bridge.

Driving directions: Driving north on US 1 from Baltimore, cross the Susquehanna River and turn north (left) onto US 222 at Kilby Corner, MD. Continue north about 1.9 mi. to Old Conowingo Rd., turn west (left) toward Oakwood and continue west about 1 mi. to cross Conowingo Creek on Pilot Town Road. About 300 yards past the creek there is a small southbound side road (may be marked as "Camp Shadowbrook Rd.") which leads to Tegg's Delight. The original home is long gone but a chimney is still standing. The area is now part of the Conowingo Girl Scout Camp.

In colonial Maryland a simple system was set up for obtaining land patents. The system was established to encourage the ownership of land in order to generate revenue for Lord Baltimore. A headright was established as the earliest requirement to obtaining the right to land. Under headright, land was granted based on the number of immigrants that were transported by an individual. Later this requirement was changed to a payment of money, called "caution money". After establishing headright or paying caution money, a warrant was issued. This allowed the person to have a surveyor lay out a parcel of land. The surveyor returned a certificate which described the parcel and often included a sketch showing the lay of the land. This certificate allowed the person to proceed to the last step, obtaining a patent. The patent also described the tract. All patents were subjected to an annual quitrent.

The following are Land Patents recorded for Edward: 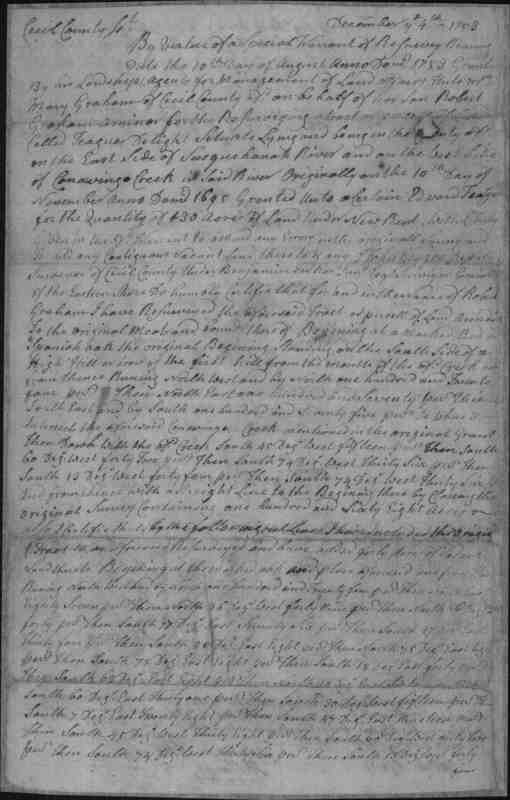