Margaret Kirkpatrick
(January 08, 1784 - March 25, 1845)
Robert was born on March 11, 1777 in North Carolina, the son of Robert Taylor and Nancy Ann Herring. He married Margaret Kirkpatrick on August 09, 1802 in Orange County, North Carolina. Margaret was born on January 08, 1784. Rober died on March 30, 1859 and Margaret died on March 25, 1845, both in Sumner County, Tennessee and both are buried in the Beech Church Graveyard in Sumner County.  See Margaret's family by clicking here:  Kirkpatrick

Robert owned 310 acres on Drake's Creek in Hendersonville and Shackle Island.  He was also known as an expert carpenter and cabinetmaker. Robert Taylor built "Old Brick" the home of William Montgomery in Shackle Island. Robert hired workers at 25 cents a day to help construct this building. He received 200 acres of land from Montgomery as partial payment, and both Robert and his son, Benjamin, built fine homes in the area.  Three of these homes are still occupied, and several homes in the area have some furniture made by Robert.

The 1830 Census has Robert living in Sumner County, Tennessee with a total of 10 people, with three slaves.

In the 1840 Census, Robert was still living in Sumner County with a total of 30 people – 12 free persons and 18 slaves. Eight people were employed in agriculture and six were employed in Manufacture and Trade.

Robert’s will was probated on May 17, 1855 in Sumner County, Tennessee. 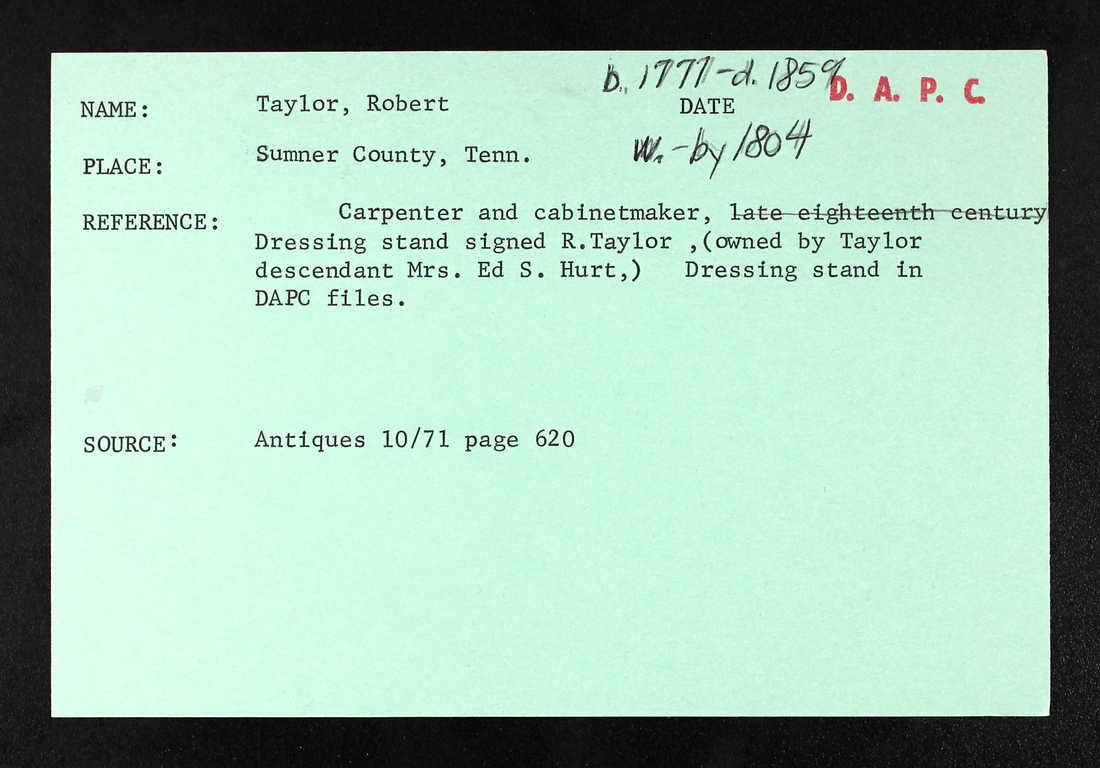 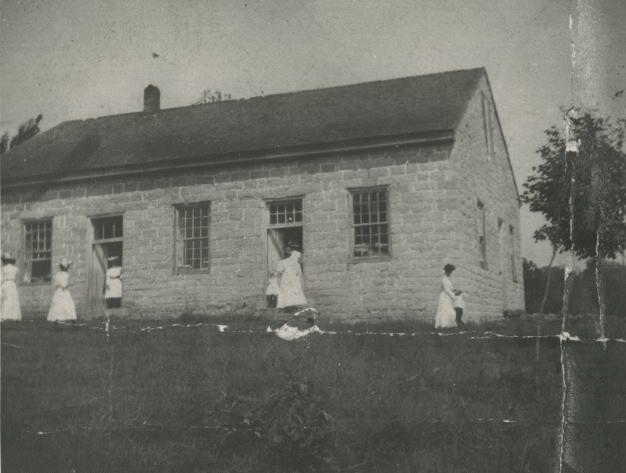 "Old Brick" the home of William Montgomery in Shackle Island. constructed by Robert Taylor
who hired workers at 25 cents a day to help construct 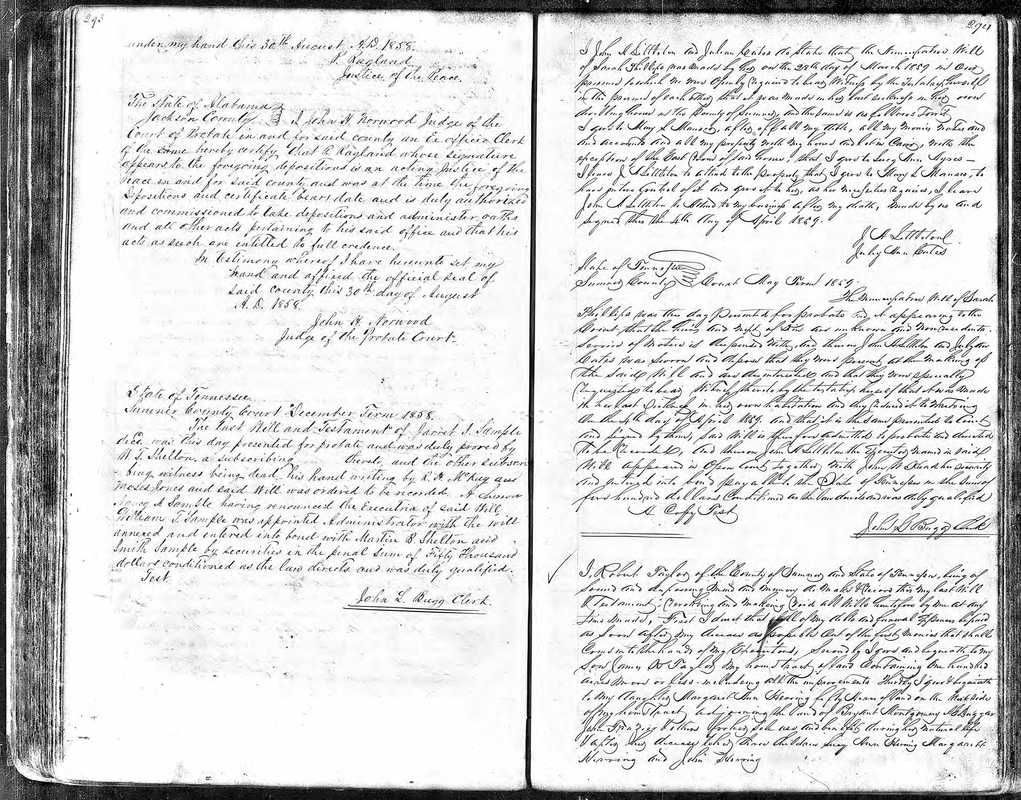 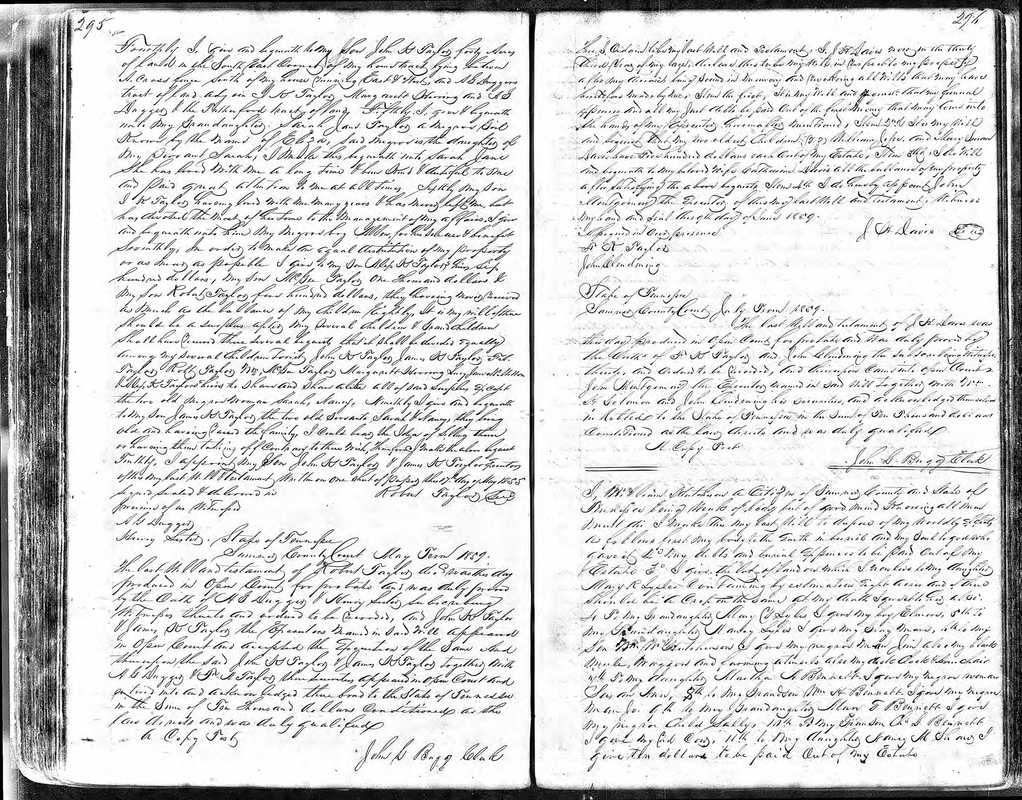 The following is a transcript of the above will.  There were some words that were illegible so a line was drawn in its place.
I, Robert Taylor of the County of Sumner and State of Tennessee, being of sound and disposing  mind and memory do make & record this my last Will & Testament ; ____ and making said all wills heretofore by me and at any time ________,
First I direct all of my debts and funeral expenses be paid as soon after my decease as possible out of the first monies that shall come into the hand of my Executors,
Secondly, I give and bequeath to my son, James K Taylor my home tract of land containing one hundred acres more or less, including all the improvements, Thirdly, I give and bequeath to my daughter Margaret Ann Herring fifty acres of land on the west side of my home tract adjoining the land of Bryant Montgomery & _______  John Frazier and others for her sole use and benefit during her natural life and after her decease to her three children Lucy Ann Herring Margarett Herring and John Herring.
Fourthly, I give and bequeath to my son John K Taylor, forty acres of land on the South East Corner of my home tract lying between a cross fence south of my house running East & West , and S G Driggers tract of land adj  J K Taylor Margarett Herring and A G Duggers & the ___________tract of land,
Fifthly, I give and bequeath onto my granddaughter Sarah Jane Taylor a negro girl known by the name of Eliza, said negro is the daughter of ____ and Sarah , I make this bequeath onto Sarah Jane She has lived with me a long time & been kind & dutiful to me and paid great attention to me at all times.
Sixthly, my son J K Taylor having lived north of me many years & has never left me, but has devoted most of his time to the management of my affairs, I give and bequeath unto him my negro boy Allen, for his sole use and benefit,
Seventhly, in order to make an equal distribution of my property or as near as possible I give to my son Alex K Taylor ____ six hundred dollars, my son McGee Taylor one thousand dollars & my son Robert Taylor five hundred dollars, they having never received as much as the balance of my children,
Eighthly, It is my will if there should be a surplus after my several  children & grandchildren  shall receive their several bequests that it shall be divided equally among my several children to which John K Taylor James K Taylor F.A. Taylor Robt Taylor McGee Taylor Margarett Herring Lucy Jane McMillon & Alex K Taylor heirs to share and share alike all of said surplus except the two old negro woman Sarah, Nancy ,
Ninthly, I give and bequeath to my son James K Taylor the two old servants Sarah & Nancy, they being old and having ____ the family, I could bear the idea of selling them or having them taking off contrary to my ____ Wish, therefore I make the above bequest,
Tenthly, I appoint my son John K Taylor & James K Taylor Executors of this my last will & testament written on one piece of paper this 17th day of May 1855.
Robert Taylor  (Mark)
Signed Sealed & Delivered
_____ ____
A G Dugger
Henry Sister
State of Tennessee
Sumner County Court May Term 1859
The last will and testament of Robert Taylor ___ was this day produced in open court for probate and was duly proved by the oath of AG Dugger & Henry Sister subscribing _____ thereto and ordered to be recorded, and John K Taylor and James K Taylor the Executors named in said will appeared in open court and accepted the Execution of the same and thereupon the said John K Taylor and James K Taylor together with AG Dugger and FH Taylor ______________ appeared in open court and entered into and acknowledged their bond to the State of Tennessee in the Sum of Ten Thousand dollars conditioned as the law depicts and was duly qualified.
A copy ______                                                                     John S Bugg   Clerk
Sources:

Hartley, William B. My Best For The Kingdom, History and Autobiography of John Lowe Butler, a Mormon Frontiersman, page 15; 2017