The Short Family became members of the Norton Family when four of Jacob Norton's (1778-1848?) children married members of the Short Family. The first Short known is Lanman Short. Researching and documenting Lanman is ongoing so my main starting person for the Short family is with his son, Josiah Short and his wife Sophia.

​Josiah is estimated to have been born about 1780 and Sophia about 1779, both in North Carolina. Josiah is listed in the 1800 US Census records of Hillsborough, Wake County, North Carolina. The 1810 US Census has Josiah and his father, Lanman, in Barren County, Kentucky. In 1830, census records has Josiah living in Hardeman County, Tennessee.  Josiah has been noted as a pioneer settler of Tennessee.  Land records show Josiah living in Tippah County, Mississippi before 1939.

Josiah and Sophia lived in Fulton, Polk County, Arkansas by 1849. Josiah was listed on the 1850 census records of Fulton County living with his son George Washington Short. Josiah was 70 years old. In 1860, census records show him to be 84 years old and living with George & Priscilla Fry as a chairmaker.  In the book "Arkansas Made Volume I" by Swannee Bennett & William B. Worthen, Josiah is listed as a Chairmaker in Polk County.  He also owned property in the county as is referenced below.

The children known were:


George Washington Short was born 2/8/1812 in Tennessee and died 2/29/1890. He and his wife, Hetty, are buried in a cemetery at Ben Ficklin which is a ghost town near San Angelo, Texas. The grave is marked "J.W." He was called Washy. Washy and Hettie's son, Luke, became a well-known figure in the history of the "Old West", a link to his biography is at the end of this page. 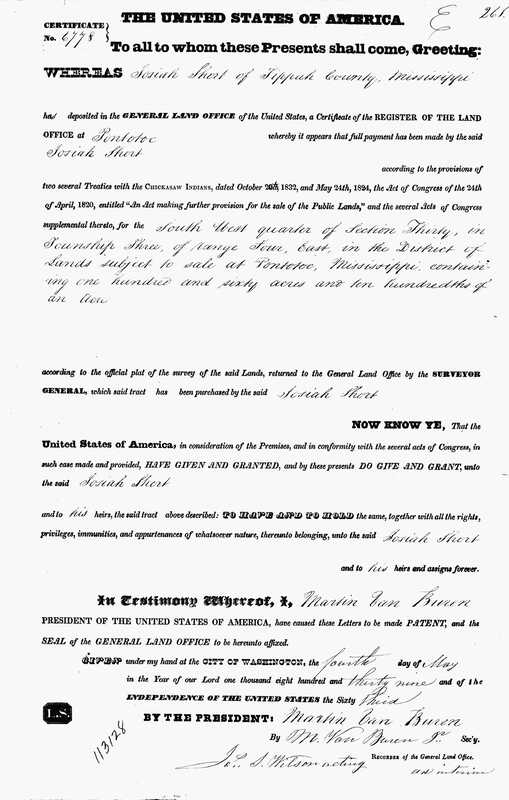