​The Karl and Elizabeth Seibel family 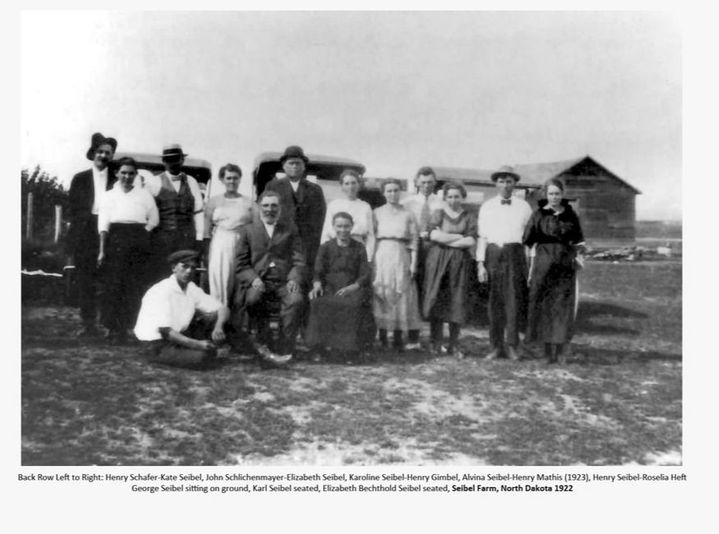 ​Karl (March 20, 1863 - June 17, 1949)  and Elizabeth (August 04, 1864 - March 12, 1942) immigrated from Temesch, Crimea, Ukraine, South Russia to North Dakota two different times in 1893 and the final time in 1903.  Karl came to the United States with two of his brothers, Lenhart and Ludwig.  Karl left his parents and six siblings in Temesch.
​The following is a letter written to Karl from his brother George in 1922 following World War I which tells of the hardships they had to endure.
Letter submitted by Phillip Morrison, a descendant of Ludwig Seibel.
Temesch, Krimea, Russia
​                                                                                                                                                                                                            December 1, 1922
​
A heartfelt greeting to you dear brother Karl and to all your family. May our loving God bless all of you. Your package (pastika) is already in Simferopol, also brother Reimche's. I will get it (orthena?) one of these days. We had a lot of rain this fall. We can not drive anywhere... .. ... We still have no horses. Life is still miserable. There are only 8 horses in the village of Temesch. One horse costs 500 million to a billion or more (rubles or kopeks). That would not be so bad if we had something to sell. We had nothing to harvest therefore we have nothing to sell. The price of wheat is 16 to 18 million (rubies) per 32 pounds (one pud). If anyone has a few hundred pud to sell then they can buy something. I traded half of my yard in Saki for 100 pud (3,200 lbs.) of wheat, a cow and ?. Conrad's wife and I together harvested 20 pud (640 lbs.) of rye. We have to live with that and buy clothing. This will not meet our needs. We just go from flour sack to flour sack. If we could butcher a hog or a beef, but we cannot do that. This is not only our condition but in all of Temesch there are no hogs to butcher. There is no fat or lard in all of the colony except what we got from American. We still have a little lard you sent. We use it very sparingly We have no other way, as we know we will not get any hogs to butcher. No doubt this seems strange to you, but it is true. In all of Temesch there are 8 or 10 hogs (wirte) and one or two young hogs that will be butchered in the coming year. As bad as the times are, how also the people have become you won't believe, it is that bad. Where brother Konrad was still living in Karimitschuck, his cattle all died. John (Johann?) was a builder or small farmer. He had only 3 cows. I thought this brother was destitute so I gave him a calf so he would have a cow in two years. Others also gave him cows. Things have changed. It is not like that today. No one will even take you along to town without getting paid. I have to pay 5 million (rubles or kopeks) to go along with anyone and that is the way it is with everything. I visited sister Elizabeth in September. I noticed they had 3 hogs and 25 piglets. I wanted to buy one and offered them 20 million (rubles or kopeks) but my brother-in-law said they need them for their family. And so it is in every situation - see how you solve  your own problems. Dear brother, do not write to them about this. We will get through this too, Lord willing. Certainly we Temeschers are worse off than our hired servants were earlier than 10 years ago. However, we still hear people thanking God for that which they have. I have heard many people say, "If we only continue to have bread and prigs (a coffee-like hot drink from roasted barley) we can survive even without meat and lard or fat." I must change the subject or you will think, "He is complaining and whinning so we should send him more things."

But, I wanted to tell a little of how the economy has changed here so you will understand. Think about it and try to imagine when you have enough of everything you need - clothing, food, water, cattle. How many years would it take for you to recover if someone would come and take away everything they desire - wagons and everything, also clothing, straw, chaff and bread. And on top of that you would have to kill all the sick horses and weak cattle. When a person analyzes our economy with high prices, one thinks only of survival, not getting ahead. There is nothing to sell. Well, I have to write like G. (George?) Baumbach said, "If I would write exactly how everything is, I would need a sheet (bozen) of paper, 2 arskin (56 inches) wide and 3 arskin (84 inches) long. Not only that but I would not have enough time.

In 1919 all Ttemeschers had visitors one night at 12:00. Three men also came to my house. They took everything they wanted such as silver, gold, clothing and left. I was left without shoes (stiefel). Konrad's Charlotte had one garment left in the clothes closit but the new dress was gone. There would be a thousand things like that to write about, but ----we are getting a little fresh air (or breathing space). Charlotte and I seeded 3 acres (3 dessiatines), 3 wheat and 3 rye, but it was in stubble ground. No one has been able to plow in Temesch as there are no animals to pull the plow. We had a lot of rain so our wheat looks very good. Those in Bitener and Kajabaker have a good crop and now they can seed a lot of ground as they have work animals. They are not so hard hit. They can sell up to 16,000 pounds (500 pud) wheat and buy what they need.

We are all in good health for now. That is, those that are still living, I am left alone again as my second golden little mother (wife?) died to typhoid fever in June. We had enough to eat at that time. I suppose she suffered a lot. We all suffered intestinal and hunger pains. I also was very sick. I thought I would die, but recovered and feel well. Four days after she died I received your packages (pasilkas). She did not benefit from it. I wrote to you in August that my wife (Alte, old?) died. Didyou receive my letter? Let us know, as there was a lot of news in it. Old Christian Tibelius has died since then. He and his wife were buried in one grave. He died 9 hours before his wife died. Oh, yes, it is hard to be alone, but it is not feasible to remarry. My desire is to bid farewell to this life. I am now in my 70th year. No doubt, my life will soon be over. And, the thousand-year millenium is not far off either. Oh, how wonderful life will be when no one will lead you astray, no hatred or friction (reib meaning to rub or grate).

You wrote in a letter that I will be getting a lot of things my mail. I cannot write in advance to tell you where or to whom you should send things. I get a lot of packages that I need to give to others. Besides, I have a lot of people around me who have nothing. We have 22 people in our house. My daughter, Katherina, and her family of 11, they have nothing - no cow or horse, absolutely nothing except a big family. Then my youngest daughter, Lydia, who are 5 in the family, they have 1 cow. Then there is my daughter Elizabeth. She has been at our house for 5 months already. Her husband Johann Littau and 4 children have starved to death. She came here without a thing and naked. And then there is me and Charlotte with her 3 children. They all are destitute. Marilis in Simpferopel gave her children away and is working for people. I cannot help even if I wanted to.

Give greetings to Christian Reimche. Tell him I received his food drafts and we are very thankful. If you can and desire to do so, you could send us more as we are in great need. If you could send us a small tractor with a two-bottom plow, then we could make some progress and seed a crop. We have enough land. We will pay you back in two years. Send us a tractor. My boys and I and son-in-law will pay you here back in two years. It should be April 1. It would be hard for you to do this alone. Maybe others could help. Talk to Christian Reimche if you can, then send us one. We would be very thankful if you would do this for us. We will not be getting work animals (either horses or oxen) in the next few years. There are no cattle in Crimea and very few in all of Russia. I heard there were only two ahead of me but when I checked with the A.R.A. there was nothing for me. I waited until today, December 28, to inquire, but still there is nothing for me. So I will send this letter. If I get work animals I will write to you. It seems to me you are not getting our letters.
George Seibel