Heinrich Karl Seibel
(March 20, 1863 - June 17, 1949)
​
Elizabeth Bechthold
(August 04, 1864 - March 12, 1942)
​Karl, he never went by his first name of Heinrich, was born March 20, 1863 in the Colony of T(D)emesch, Krimm (Krimm is short for Crimea), South Russia to Johann Konrad and Elizabeth Baumbach Seibel. He was the youngest of seven children, brothers Heinrich, Conrad, George, Lenhart, Ludwig and Johannes, and sister Elizabeth. 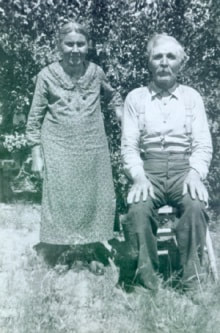 ​Karl "chose" to marry Elizabeth Bechtold who lived in the Colony of Byten, about 30 miles from Temesch. Elizabeth's parents were Margaret Farber Bechthold and Heinrich Bechthold. Karl had become friends with Heinrich and Margaret before "choosing" Elizabeth to marry. At that time, most marriages were arranged between parents or matchmakers. It is not for certain whether Karl personally picked or was parentally planned, but the match was reported to the pastor of their church and announced in open church services three Sundays in succession before the wedding.
Elizabeth and Karl were married October 3, 1880. They lived in the colony of Temesch with Karl's father, Konrad, for another 13 years. During this time they had six children. They were:
1.      Kathrine, b. February 2, 1883
2.      Maria, b. March 29, 1885
3.      Elizabeth, b. May 18, 1887
4.      Konrad, who died in infancy
5.      Karoline, b. January 16, 1891
6.      Twin sister to Karoline who died at birth
In March of 1893, Karl and his family, including Karl's brothers Lenhart and Ludwig and their families decided to go to America, having heard of life in the USA through friends that were there, also some that were there and came back to Russia to visit. Life in the new country sounded interesting to them.

It was in March of 1893 they loaded their wagons for the first leg of their journey which to them some 30 Russian miles to the little colony of Byten where they boarded a train for Bremerhaven, Germany. The change in their mode of transportation from wagon to train might have been appreciated by them, but we wonder if anything could be worse than sitting on their baggage in a box car for five days. The wives of the three brothers, Lenhrt, Ludwig, and Karl were all expectant mothers and with all the fuss and work packing for the long trip, plus the wagon ride from Temesch to Byten and five days in a box car, it is no wonder that on March 31 Karl’s wife, Elizabeth, gave birth to a daughter, Charlotte, in Bremerhaven, Germany. The birth of the baby in Bremerhaven caused them to miss their boat. This necessitated an eleven day layover until another boat sailed. Thus it came about that Lenhart’s wife Wilhelmina gave birth to a son aboard ship between England and France on April 9th. This baby was named after the ship’s Doctor and Captain, George Herman.

They sailed on the SS Weimar. The ticket agent for the boat passage was Friedrich Missler, 30 Bahnhofstrasse, Bremen, Germany. The F. Missler is one of the more famous “ghost” ships in emigration and immigration lore. No ship by that name existed. The confusion stems from the fact that Friedrich Missler was the biggest ticket agent in Bremen, and shipped emigrants out from Germany to Canada, the US, South America, and South Africa in the late 1800’s and early 1900’s. He usually gave emigrants a small wallet to hold their ticket and other papers. That wallet has a picture of a steamship on the front and the name “F. Missler” in large letters. As a result, for decades, people have begun their genealogy serach looking for the SS MISSLER, only to find out later Missler was the shipping agent. Friedrich Missler had a good working arrangement with the North German Lloyd Line. When folded open, this wallet measures approx. 8 ½” by 7 1/8”.  Karl’s wallet was passed to his daughter Alvina Seibel Mathis, then to her daughter Lenore Seibel Horrel.
They immediately left by train for Wittenberg, Hutchinson County, South Dakota. Karl and his brother Ludwig applied for their First Papers at the Circuit Court of Brule County, City of Chamberlain, South Dakota on May 18, 1893.

The next spring, 1894, they boarded a train for Colorado looking for homestead land. They decided on 160 acres northwest of Burlington, Colorado. But due to adverse conditions they decided to return to South Dakota. This trip took 10 days to cover the 400 miles back to Wittenburg.

In March of 1895, they decided to return to Temesch, Russia. Instead of farming, Karl became a trader, trading farmer's produce and animals from Temesch to Sevastopol and bringing back seafood to Temesch. Three more children were born to Karl and Elizabeth: Lydia on March 3, 1896; Henry on January 24, 1899; and George on July 11, 1903.

In 1903, they decided to return to America. The Russo-Japanese War being a factor in the decision. They took the same route they took in 1893. They instead sailed on the SS Maine. The Ship Manifest for the Main list them as:

The final destination was Sykeston, North Dakota where Karl's brother, Ludwig, lived. They moved to McClusky, North Dakota the next spring, remaining there until 1922.

Karl became a Naturalized American Citizen on May 31, 1922 in McClusky, Sheridan County, North Dakota. His "First" and "Second" papers are included here. The Second Papers state that on May 31, 1921, Karl did not speak English when he first started the process to become a citizen but he must have learned English by May 31, 1922 because that was when an Order of Court Admitting Petitioner was entered he was "allowed" to become a citizen. The Certificate of Naturalization was issued June 10, 1922, number 1764555. 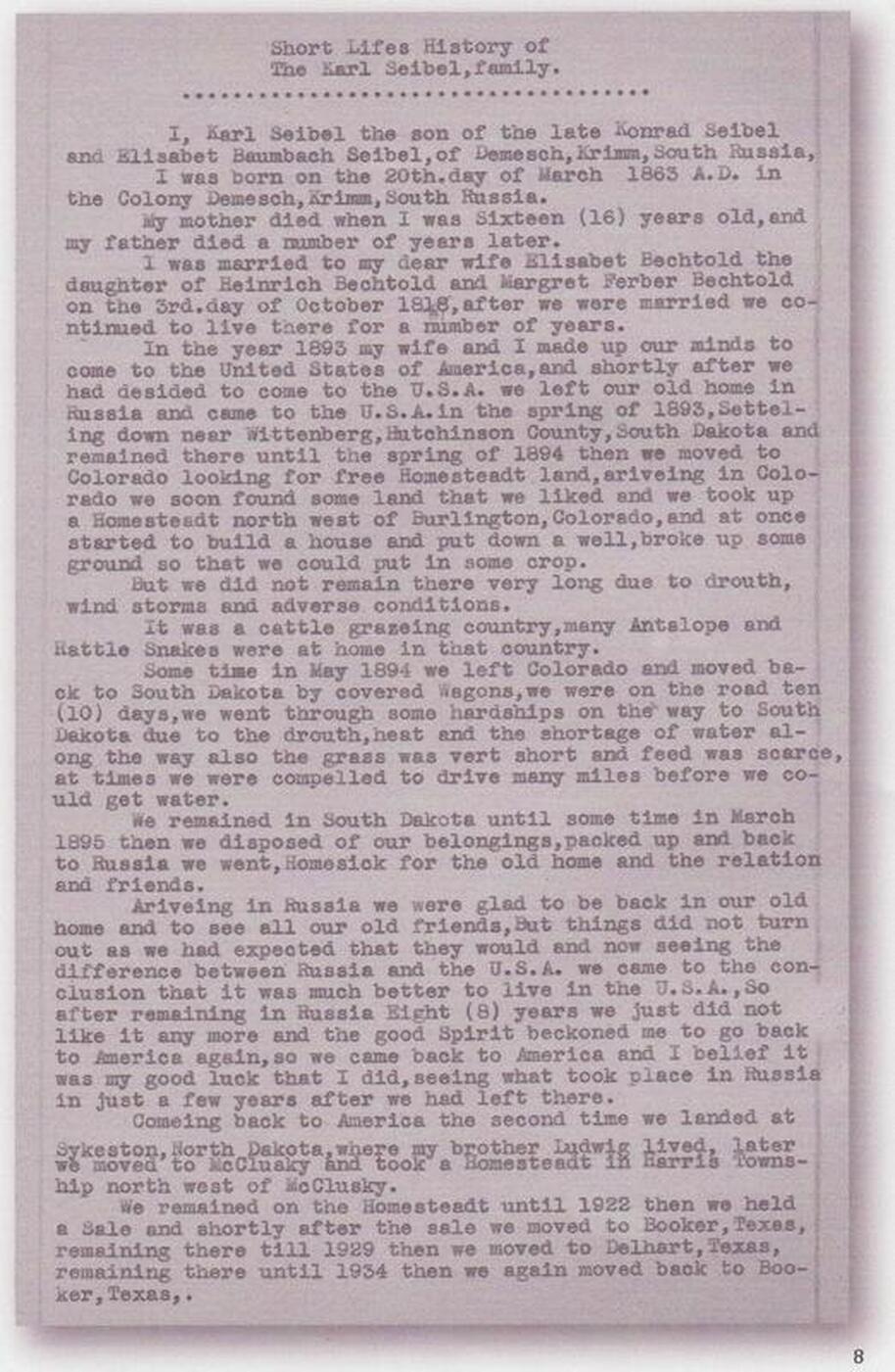 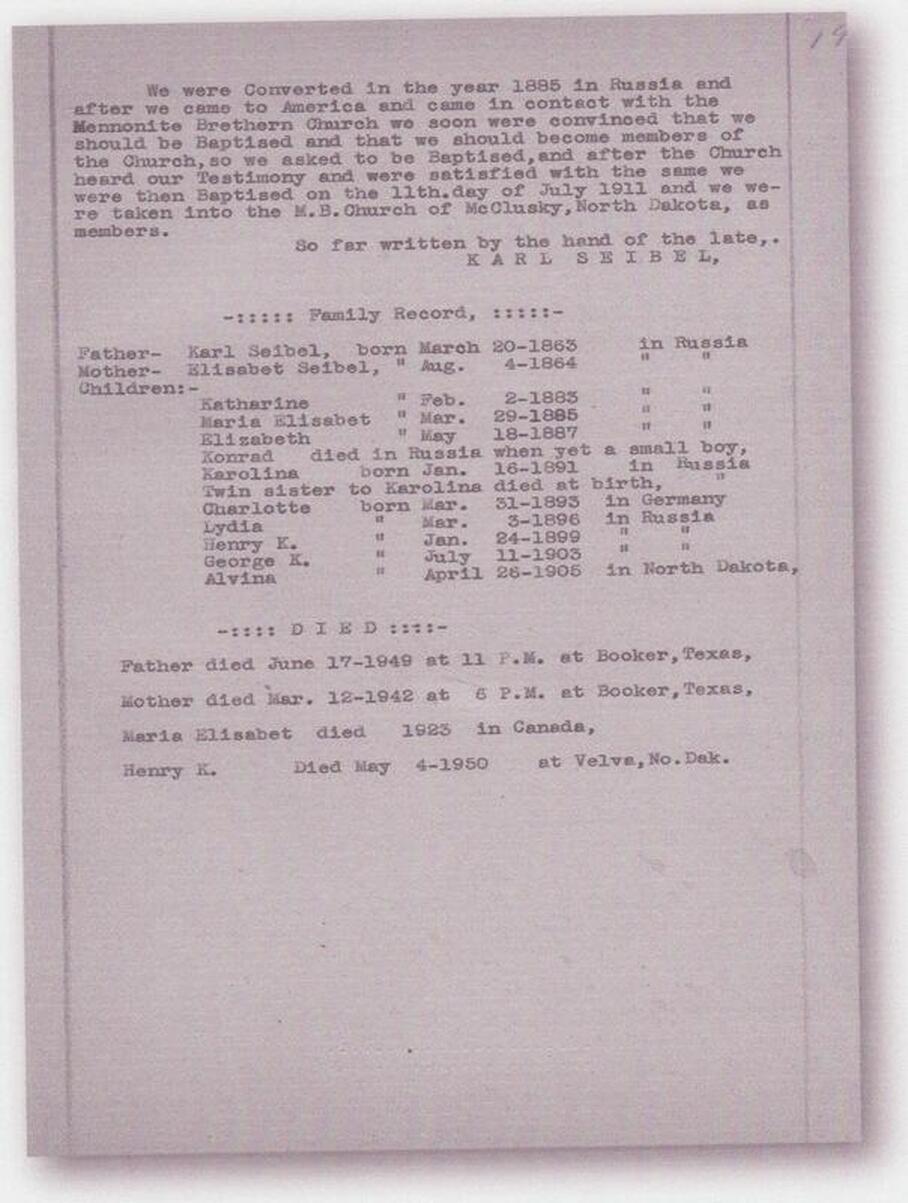 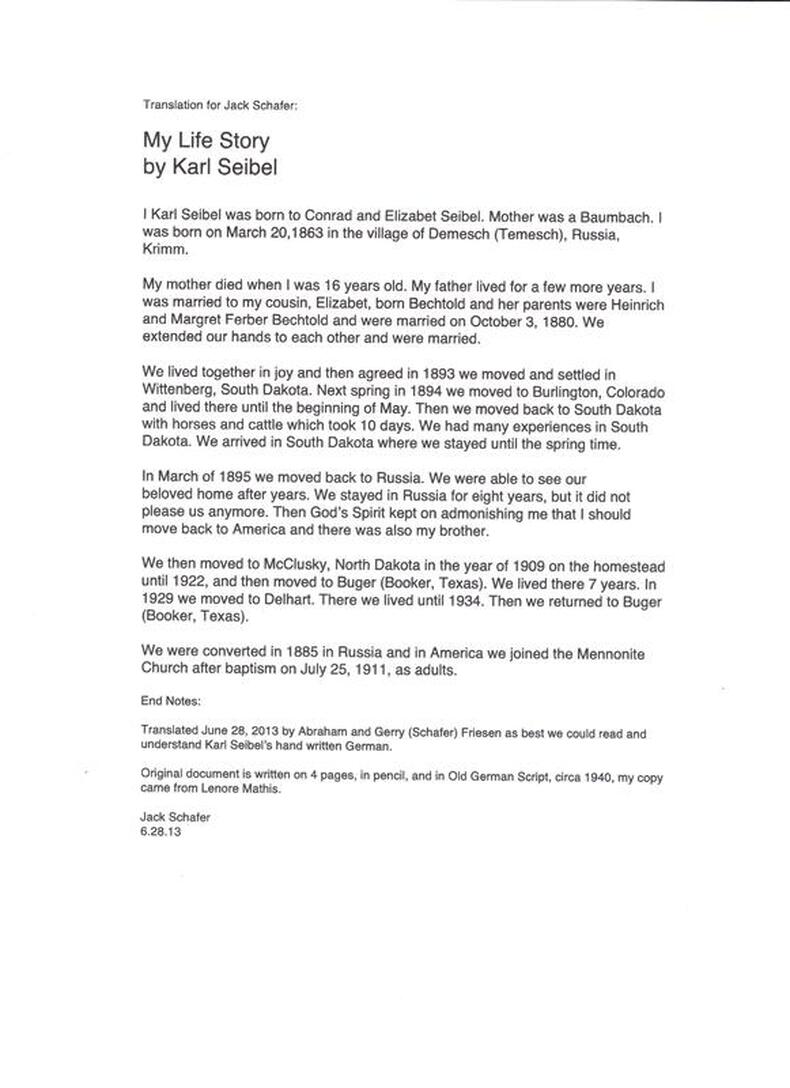 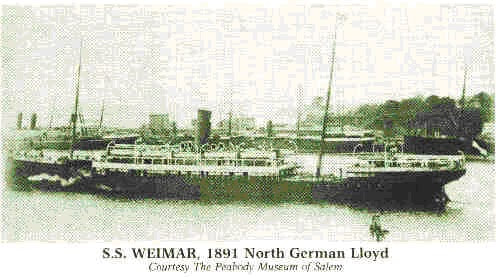 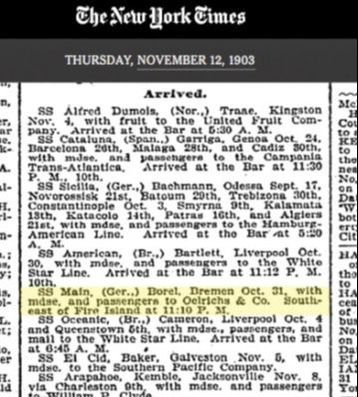 Notice of Arrival for second immigration in 1903
​Fire Island is a light house located on Long Island, New York, they would have seen the light house first upon arriving at the coast. They would have then proceeded to Ellis Island for demarcation. The SS Main’s Captain was Borel, they departed Bremen on October 31, 1903 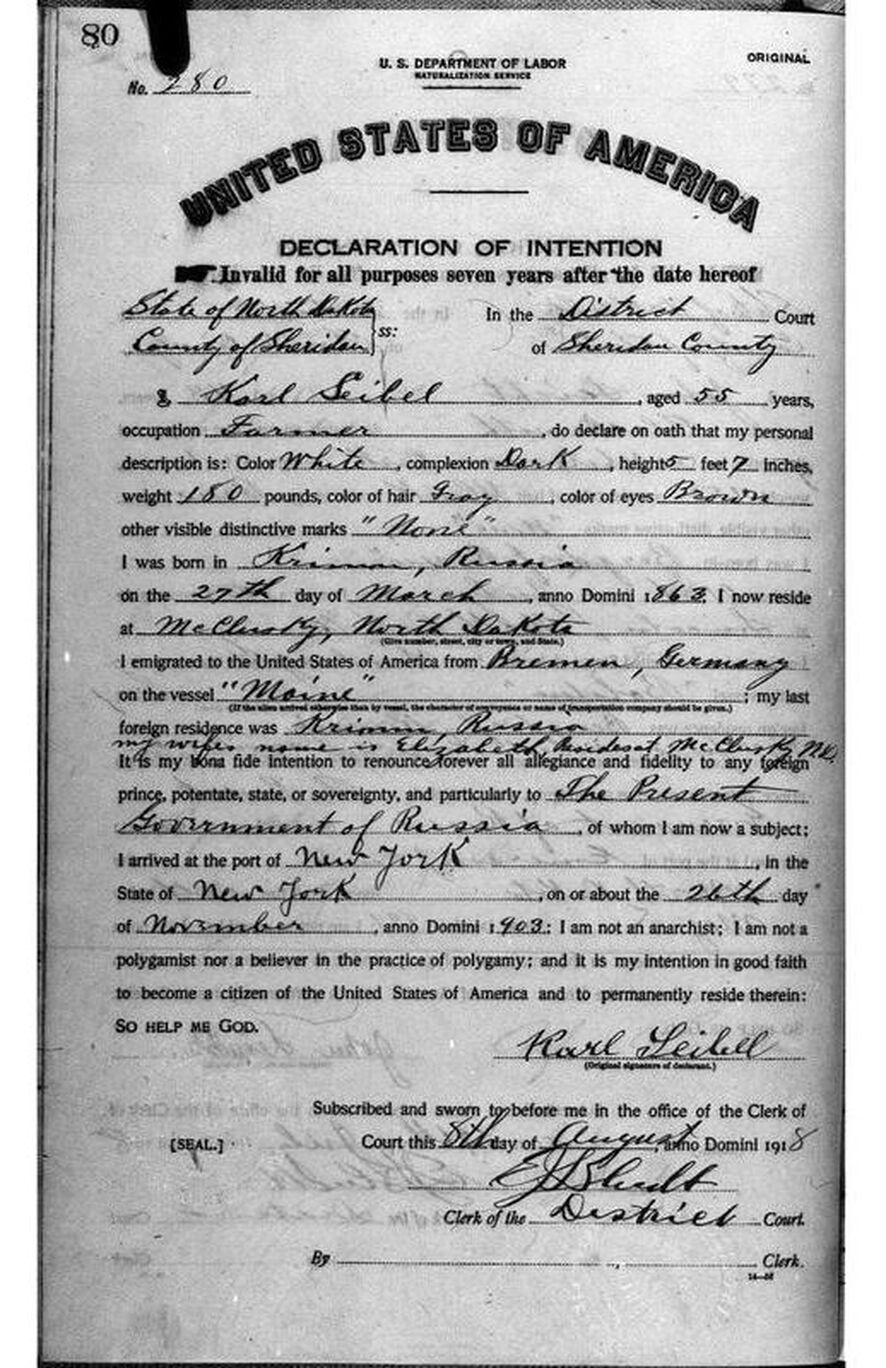 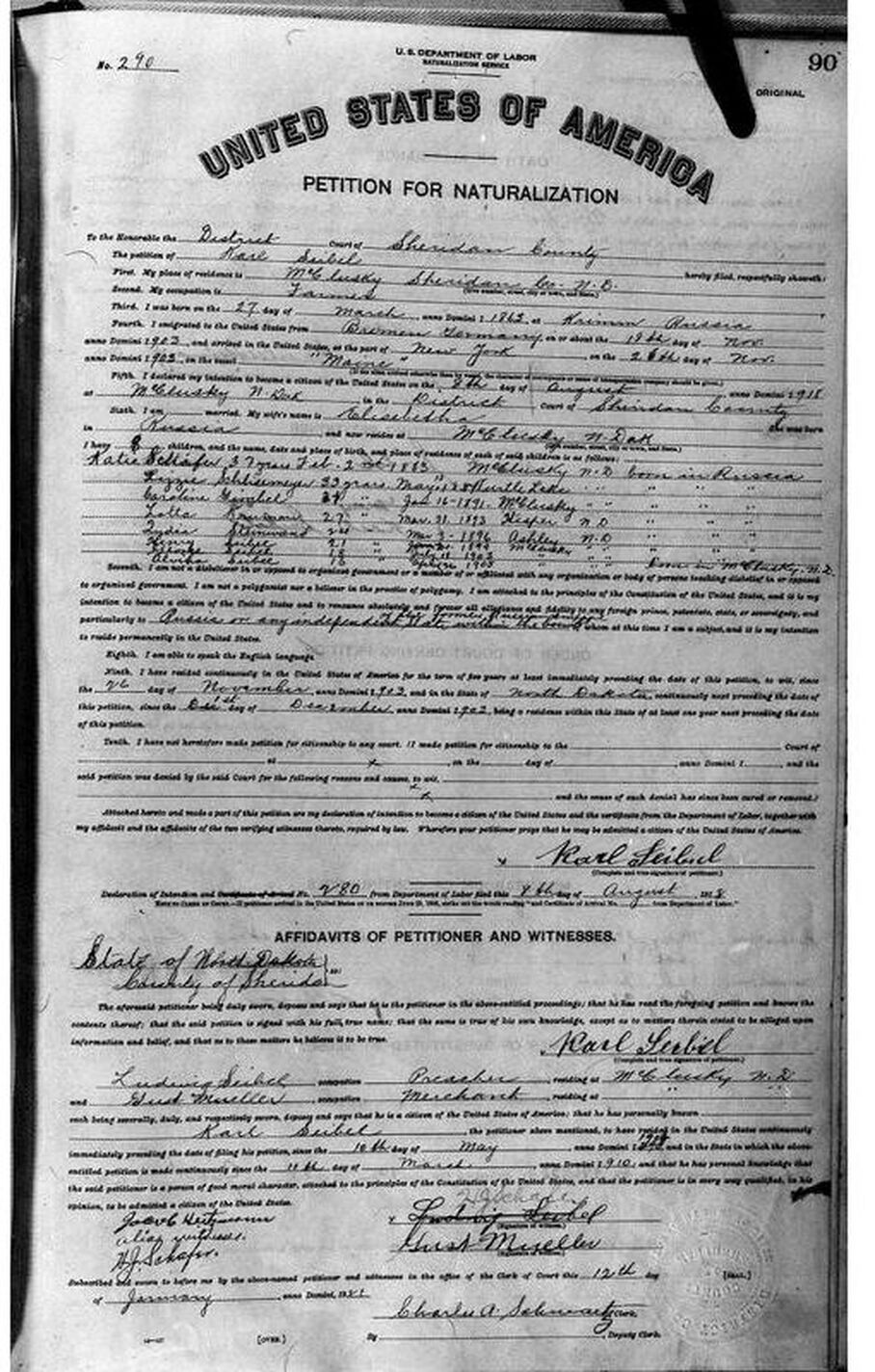 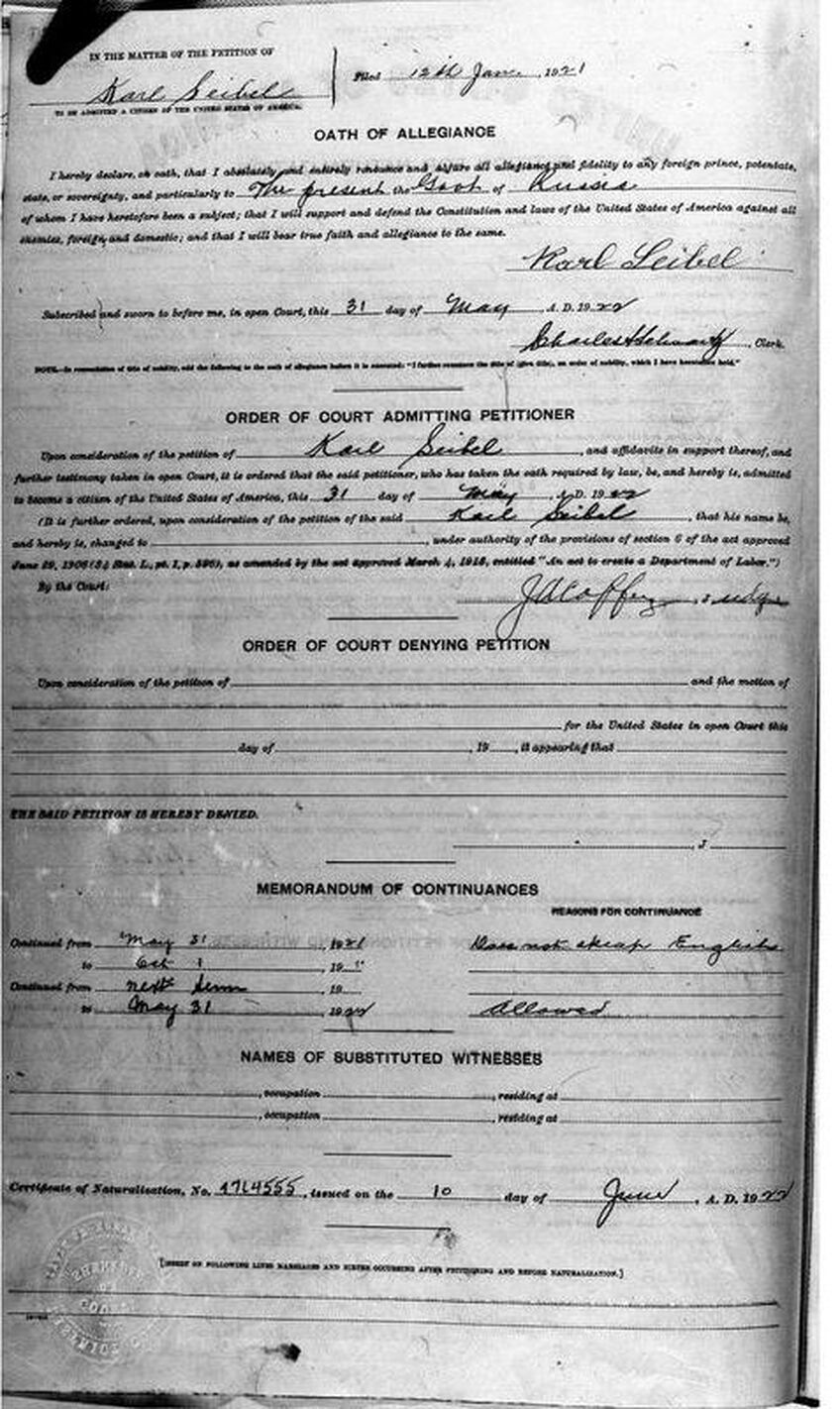 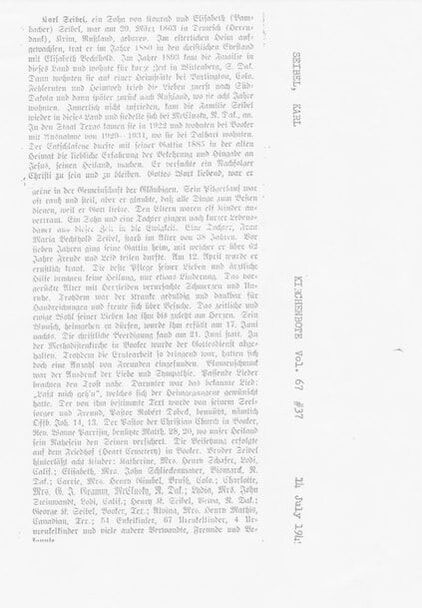 KONRAD SEIBEL
Konrad Seibel, son of Konrad and Elizabeth (Bambacher [sic Baumbach]) Seibel, was born in the village of Demesch (Herrndank), peninsula Crimea (Krim) Russia, on March 20, 1863. His mother passed away when he was 16 years old and his father a few years later.

On October 3, 1880, he was married to Elizabeth Bechthold. Born to this union were eleven children. Conrad and the twin sister to Carrie died as infants and Maria Seibel Bechthold died at the age of 38 years. His wife preceded him in death March 8, 1942.

The Seibel family left the old country in 1893 and came to the United States in the same year, settling at Wittenberg, South Dakota. In the next year the family moved to Burlington, Colo., taking up a homestead. On account of drought, crop failure and homesickness for the old country, the family returned first to South Dakota and later to the home country (Russia), remaining there for eight years. In 1903 they returned to the U.S.A., settling at McClusky, North Dakota. In 1922 the family came to Booker, Texas and have lived there since with the exception of 1929-34 when they were settled at Dalhart, Texas. For the last years he lived with his youngest son, George K.

Bro. Seibel and wife were converted by the grace of our Lord Jesus Christ in 1885 in Russia. He was a sincere Christian and a faithful father, loving the fellowship of true Christians. He believed and practiced what the good old Bible says: "Believe on the Lord Jesus Christ and thou shall be saved and thy house. We believe that through the grace of the Lord Jesus Christ we shall be saved." As it was the desire of Bro. and Sister Seibel to become members of the Mennonite Brethren church at McCluster [sic McClusky], North Dak., they decided to receive the symbol of another baptism.

During the last few years Bro. Seibel lived a quiet and godly life, enjoying his Bible and the reading of the "Zionsbote" and "Der Kirchenbote," attending the services of the Emanuel Congregational church of Darrouzett, Texas. In him was a strong desire to go to the better beyond.

On April 12, 1949, he became ill seriously. On his sickbed he was thankful for every word and deed bringing him comfort. He remembered gladly his 86th birthday, Sunday March 20, when some of his children were present and surprised him. His age caused some heart ailment. Although physicians' aid was obtained and the best care given to him by day and night, he had to suffer much. Nevertheless he was patient and not dissatisfied. June 17 before midnight the moment came when he could go home. His pilgrimage was 86 years, two months and 27 days.
The morning of June 21 funeral services were held at the Methodist church of Booker, Texas. Officiating were his present pastor, Rev. Robert Dobeck of the Emmanuel Congregational church, Darrouzett, Texas, and Rev. Wayne Parrish, pastor of the Christian church of Booker, Texas.

A trio delivered the songs, among them “Laszt mich geh’n,” which Brother Seibel had appointed. According to his desire the text for the address in the German language was: Offenbarung St. John’s, (Rev.) 14:13.
He is survived by his eight children and their families and many relatives. The children are: Katherine, Mrs. Henry Schafer, Lodi, Calif.; Elizabeth, Mrs. John Schlickenmaier of Bismarck, North Dak.; Carrie, Mrs. Henry Gimbel of Brush, Colo.: Charlotte, Mrs. G. J. Gramm of McCluster [sic McClusky], No. Dak.; Lydia, Mrs. John Steinwandt of Lodi, Calif., Henry K. Seibel of Velva, North Dak.; George K. Seibel of Booker, Texas; Alvina, Mrs. Henry Mathis of Canadian, Texas.

​​After the second and final immigration to the US, Karl patented 160 acres in 1908 northwest of McClusky, ND. From the Harris Township Map from 1914 it is apparent Karl owned more than 160 acres. There is an additional 80 acres in Section 27 and 80 acres in Section 34 that show up in 1914. Karl put together an ownership of 320 acres in North Dakota

Click on arrow to return to Seibel main page