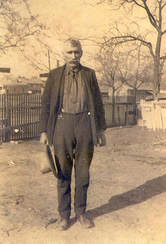 Obediah married Nancy Ellen Sparks on January 9, 1876. He was 16 years old and Nancy was 15 years old. She died at age 31 during childbirth and the baby was never born. Five children was born to this Union, one small girl 2 years old died. The other four survived. The eldest a girl, her name was Elizabeth but they called her Lizzie, next came Minnie a girl, John Calvin, my father, and last a boy named Lonnie Earl, known as Lon. Uncle Lon was 101 1/2 years old when he died. He was the last living Pollock of this line, now deceased.

Obediah D. Pollock had two brothers and one sister. His Grandmother, Mrs. Coley, took him to raise after his mother died at his birth. The two brothers and sister remained with his father. They moved to Tennessee and he had no remembrance much of his family from then on.

Obediah Pollock died at 84 years of age. Grandpa Pollock, as we called him, was a methodist preacher. Grandpa Pollock made his first corn crop in Mississippi at the age of 9 years with a blind mare. He trapped quail in the snow and rode the old blind mare into Ripley, Mississippi and sold the quail to judges and lawyers. Grandpa grew up in very hard times. He did not own a pair of shoes until he was 9 years old. His feet would crack and bleed as he walked and ran to his traps to collect the birds. Once I remember, Grandpa telling of how the enemies took their food, horses, and supplies and left them with almost nothing. Growing up in Civil War times was very difficult. He learned how to plow in the new ground with a homemade double shovel and using the blind mare. The corn he grew was made into cornmeal and was mostly the staff of life. Grandpa had a great love for life and worked and earned his living by the sweat of his brow.

​* Numbers placed in brackets denote the generation in the lineage.