The History of the
​Otterbach Family

An excerpt from the book " Ancestry and Desendants of the Nassau-Siegen Immigrants To Virginia 1714-1750" by B.C. Holtsclaw; 1964

"The Otterbach (i.e., otter brook) family seems to have taken its name originally from a farm, "in der Otterbach" in the township of Niederfischbach in the county of Sayn, just south of Nassau-Siegen, [Germany] which is mentioned a number of times in early records. The baptismal register of the church at Freudenberg, for example, shows as late as Mar. 12, 1748 the christening of a young son of Noell (i.e., Arnold) Otterbach, citizen of Freudenberg, and his wife Catharina, the godfather being the father's brother, Weigand Otterbach, son of Eberhard Otterbach "in der Otterbach." The origin of the family in the County of Sayn fits in, too, with the first appearance of the name in Eiserfeld, which was close to the border between Sayn and Nassau-Siegen. There were Otterbachs in Sayn in the 17th century, too, for on Mar. 20, 1670 the court records show that Ludwig Otterbach of Herdorf in the County of Sayn, his daughter's husband, Sebastian Hoeber of Winderstein in the township of Burbach, and his two unmarried sons, Johannes and Johann Philipp Otterbach, acknowledged to their resepective wife, mother-in-law and mother (name not given) that they had sold inherited property at Seelbach in Nassau-Siegen to Johannes Heimbach, Associate Justice of the Hain Court, and his wife Catharina for 220 Gulden. Though no direct kinship of this Ludwig Otterbach with the Nassau-Siegen family can be shown, it is obvious that he had married a woman from Seelbach, perhaps a member of the Spielmann family, for it is stated later on in the document that "Johannes Spielmann of Seelbach is also selling his rights to a house in Trupbach"" 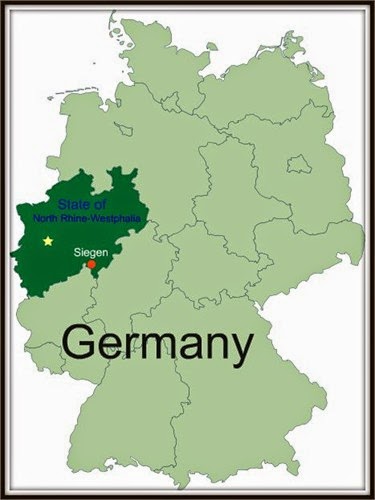