NEWSLETTER EDITOR’S NOTE:       There is recent information that Mary and John Richardson did live in Westchester County, New York, and had three children, all girls.  The three were Bethia, born 1654, and married to John Ketcham; Mary, born 1655, and married to Joseph Hadley, and Elizabeth, born 1656, and married to Gabriel Leggett.  As we know from the court records above, Mary was in trial in new Haven in Oct. 1854 and was pregnant at the time.  Thus, it is possible, although not proved, that Mary’s second child did live and was named Bethia.  John Richardson died in 1679 and Martha remarried Capt. Thomas Williams.  They had no children.

Soon after her conviction, Martha and John, to avoid further reprisal, moved to nearby Westchester County, in New York.
There John Richardson, in partnership with Edward Jessup, bought Indian lands from the local Indians, the Shonearoekite and eight other tribes This patent dated April 26, 1666 was known as West Farms Patent and was granted to them by King James. The name was given to describe its location relative to the other settlements in Connecticut.

The boundaries of their land was the Bronx River to the East; East River to the South; Harlem River and the Hudson Rivers to the West; and the township of Yonkers on the North. Within a year Edward Jessup died and willed his land to his daughter Elizabeth Hunt, the wife of Thomas Hunt. Today Hunt’s Point on the East river is named for this family.

In 1873 West Farm was removed from Westchester County and annexed into New York City. In 1898 it was made a burrow of New York City, known as Bronx. A descendant family through Elizabeth, the daughter of John and Martha, still owns land in Bronx. Their name is Tiffany.


For further reading, a more detailed story can be found in the book "Early Settlers of West Farms Westchester County, NY" by Rev. Theodore A Leggett.  John Richardson is first mentioned on page 10 and mentioned throughout the book.  A copy can be downloaded below and also be downloaded from http://archive.org 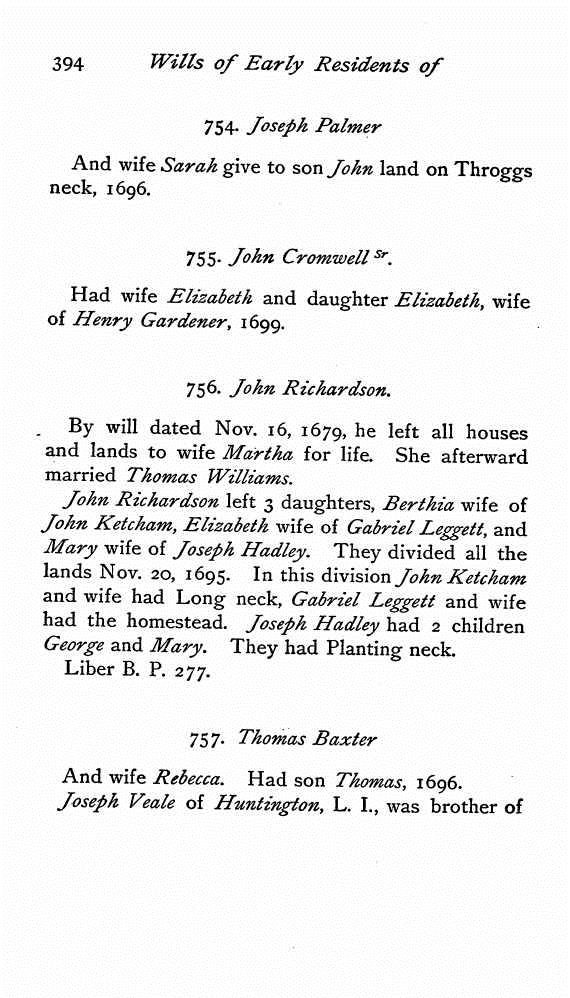