The History
of the
Gresham Family

The following two paragraphs are an abstract from the book "The Norman People and Their Existing Descendants in the British Dominions and the United States of America" pgs. 268-269:

​Gresham or  Branche.    The Norman family of Branche, whose estates lay in the Caux, accompanied William de Warrenne to England 1066, where Ralph Branche received a grant of two knights’ fees, of which Gresham was the chief seat. Barsham was also held from the De Wancis, tenants of Warrenne, Ralph and his son Richard occur in the charters of Walsingham Abbey. The latter had Walter, who in 1165 held the Norman estate of half a knight’s fee in capite in the bailifry of Caux. William B. of Gresham, his brother, had issue Richard, who t. Henry II. Confirmed to Castle Acre Priory the titles of his lordship of Gresham, which had been granted by his ancestors . This Sir Richard Branche was one of four knights  summoned in 1200 to select 12 knights for the grand assize, Norfolk (RCR, ii). Sir Peter, his grandson, held Gresham and Aylmorton by the service of two fees from Earl Warrenue, and 1241 had a writ of summons to pass into France, and had a grant of market, fair, and free warren.  He had two sons, Nicholas and Roger, the former of whom with his descendants bore the name of Branche, the latter that of De Gresham. Both continued to bear the same arms (a chevron between three mullets), merely varying the tinctures. In the 16th cent. The Greshams added a chief variously charged to their arms.
Roger Branche or Gresham was a benefactor (with his wife) to Marrig Priory, York. Roger de G., his son, was living 1313 (Blomfield, Norf. Ix. 368). Edward de G. had lands in Bodham, Forfolk, 1363. Another Edward, living c. 1400, was father of John Gresham, who resided at Holt, Norfolk, and was the direct ancestor of the celebrated Sir Thomas Gresham. (See Blomefield’s Norfolk.)

Clarification of  the language and terminology in the above abstract is as follows: 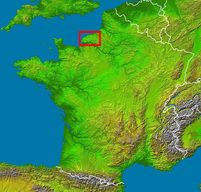 The Caux -  is an area in Normandy occupying the greater part of the  Frenchdépartement of Seine Maritime in Normandy. It is a chalk plateau to the north of the Seine Estuary and extending to the cliffs on the English Channel coast; its coastline is known as the Côte d'Albâtre. In the east, it borders on the Pays de Bray where the strata below the chalk show through.
William de Warrenne, 1st Earl of Surrey, Lord of Lewes, Seigneur de Varennes (died 1088), was a Norman nobleman created Earl of Surrey under William II Rufus. He is among the few who are documented as having fought for William the Conqueror at the Battle of Hastings in 1066. At the time of the Domesday Survey, he held extensive lands in 13 counties including the Rape of Lewes in Sussex, now divided between the ceremonial counties of East Sussex and West Sussex.
​
Knight's fees - In feudal Anglo-Norman England and Ireland, a knight's fee was a unit measure of land deemed sufficient to support a knight. A knight's fee cannot be stated as a standard number of acres as the required acreage to produce a given crop or revenue would vary depending on many factors, including its location, the richness of its soil and the local climate, as well as the presence of other exploitable resources such as fish-weirs, quarries of rock or mines of minerals. If a knight's fee is deemed co-terminous with a manor, an average size would be between 1,000 and 5,000 acres, of which much in early times was still "waste", forest and uncultivated moorland.
​
Grand Assize - was a legal instrument set up in 1179 by King Henry II of England, to allow tenants to transfer disputes over land from feudal courts to the royal court.