Benjamin was born in 1753 in Granville, North Carolina, the son of Samuel Denton and Margaret Moore. He married Priscilla “Celia” Rebecca Wiggins November 18, 1772 in Granville. Celia was born in 1755 in Granville, North Carolina and died in 1808 at the age of 53, also in Granville, She was the daughter of Thomas Wiggins (1730-1799) and Elizabeth Cooper (1735 - ?).  Elizabeth Cooper was the daughter of Benjamin Cooper (1701-1761) and Elizabeth Cannon (1716-1759). Benjamin Denton died in 1810 in White County, Tennessee and is buried Hebbardsville, Henderson County, Kentucky.

Benjamin is listed in the tax records for Granville CO, NC in 1784 and 1786. No township listed. From copies of the deed book in "Kinfolks of Granville CO, NC, 1765-1826" by Zae Hargett Gwynn: "Benjamin Denton and wife, Celia Denton, and their children, John Denton, Reuben Denton and Polly Beckham, wife of John Beckham, sold land willed to said Celia Denton for her lifetime by Thomas Wiggins and then to go to her children. Frederick Denton, Samuel Denton and Elizabeth Denton were also children of Benjamin and Celia Denton. Frederick Wiggins also signed this deed, May 24, 1805."  From the 1803-1806 Court minutes of Granville CO, NC: "Deed from Benjamin, Celia, John, Reuben Denton, John Beckham, Frederick Wiggins and Polly Beckham to Stephen Sneed, 197 acres and Celia Denton relinquished her dower right in said land."

They had the following children: 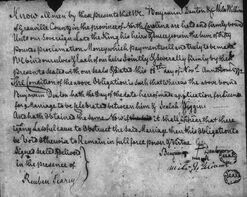