Wife #2  Susannah A. Andrews
​
Owen Colonna w​as born circa 1630, his parents and the place where he was born is unknown at this time. Since spelling of names were not strictly adhered to in this era, Owen can be found as "Ogen Collmon", "Hone" Collony, Owen "Ocollena", "Owin Colloney", Owen "Collony", Owen "Collonell", Owen "Colloney", and Owen "Collonon".

The name of Owen's first wife is unknown. His second wife was Susannah A. Andrews.

Owen can be found in many court records of Accomack County, the following are two land records that were found:

Owen Colonna bought land on 17 April 1678 at tract A22, between Pungoteague & Craddockville, Accomack Co, VA. Owen Collonell of Nandary bought 300 acres called Timber Neck at the head of 'Corotock' (Cradock) Neck from Major John West of Chessonessex and his wife Matilda, it being the southwest corner of his patent, and the neck being one formed by two small branches of the present Curratuck Creek.

He bought land on 22 October 1680 at Accomack Co, VA. Lt. Col. John West of Chessaconessex to Owen Colloney of Nandue one neck of land known by the name of the Island Neck (no acreage given), being part of my divident at Nanduay & joyneth with Timber Neck & is the said land whereon the said Colloney now dwelleth & bounded by the Running Branches thereof for 32,000 pounds of tobacco in caske.

Here is a partial transcript of Owen's will with the actual typed Will and where it can be located below:

On 5 December 1692 at Accomack Co, VA. In his will Owen Collony gave son Owen Collony the plantation where he lived containing 300 acres, 2 best feather beds in the two chambers below stairs, with curtains and vallens, and bedsteads, and all belonging to them, all wearing apparrell both linen and woolen, and his horse called "Golding," and bridle and saddle and othe furniture. The long table - - - - which will now form a three square table, a turned couch, six chairs, a large pair of and irons, tow steelyards, a great one and small one, a fire shovel and tongues, and a hand mill, 2 guns, a large iron dripping pan, an iron spitt, a pair of bellows, and iron pot that is large, an iron kettle, a brass stew pan, a chafing dish and gridiron, and all other iron work that belong to me, a looking glass, 2 casks of salt, and all other casks, old and new, and other wooden ware belonging to me. I give to my daughter Esther Sill, there pewter dishes, three saucers, three porringers, a pewter - - - -, the round table in the hall, three flag chairs, and three plant bottom chairs, an hair couch, a feather bed that is in the chamber above stairs with a pair of sheets, a pair of blankets, a rug belonging to it, two iron pots and pot hooks, one small and the other large, two cows named "Cherry" and "Brindle", one piece of blue linen, on remnant of white linen, which I guess to be about eleven or twelve yards, 6 yards more white linen, bought of Rich and Lucas; a woman servant, Margaret Moon, a broadcloth waistcoat, 3 1/2 yards white linen bought of Rich and Lucas, also two chests, one called a Dutch chest and the other the Elm chest: and to her daughter Eleanor Sill, one cow called Little Thing; and to the other daughter of Esther Sill named Susanna he gave one red cow called Beggar. To his grandson Bryan Collony he gave the island neck of land up to the hdline towards Kellam's land, and bounding otherwise by the 300 ac formerly given to his father Owen Collony, also one cow called "Mealy Mouth", one mare called "Mall." I give unto my son-in-law William Sill 1/3 profits of an orchard on the land given unto my grandson Brian Collony, for the space of seven years, provided he will keep and maintain said orchard fence in sufficient repair, and I give him the benefit of the great pasture for his own creatures in moyreeling (mireing) time, together with my son Owen Collony for the space of four years provided he help my son Owen Collony to keep up and secure the said pasture fence, same is to be understood my meaning about the orchard fence. I give unto my son-in-law Stephen Warrington a Kersie gown lined with purple baze and his wife one cow called Prittie. I give unto Arnold Harrison my son-in-law a purple gown. To my son-in-law William Sill, a red penny stone waist coat, and remainder of his estate he gave to son Owen Collony and appointed he Extr, but desire his friend Mr. Thomas Teackle to be overseer over what he had given to his grandson Brian, and he gave to his daughter Esther Sill the last of all, three pewter plates. Witt: Thomas Teackle and Provis Nelson.
- Provided by MilesFiles 22.2, URL: https://espl-genealogy.org/MilesFiles/site/p358.htm#c35777.16

​The following two pages is the Will of Owen Colonna: 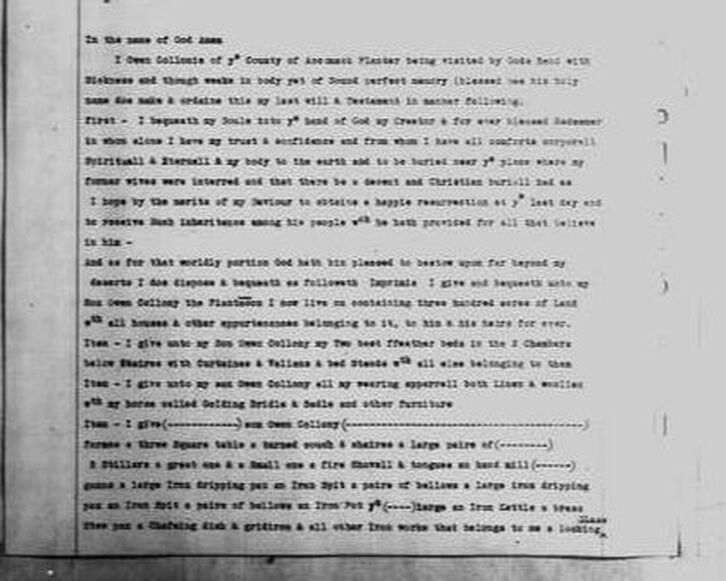 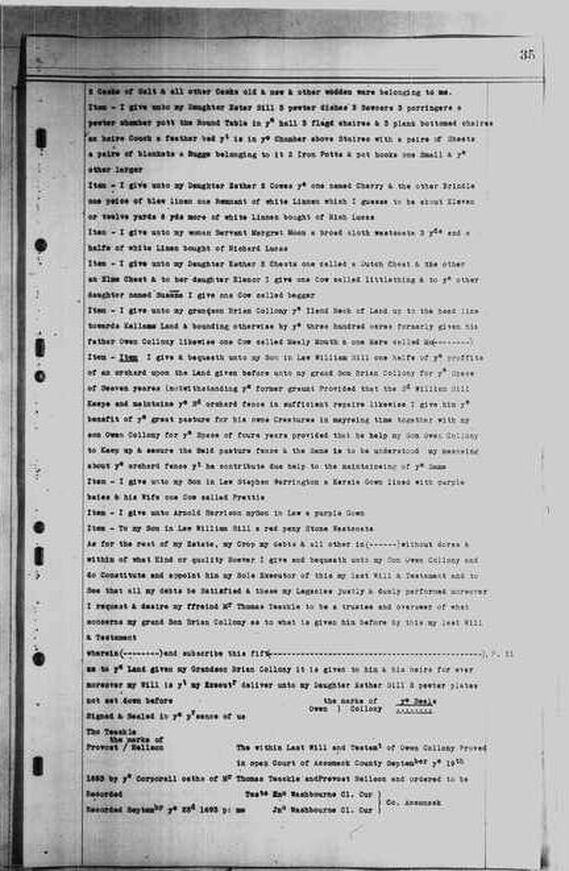