The following information on Thomas and Dorcas Booth is an excerpt from the book "The Descendants of Thomas Booth of Amelia County, Virginia" compiled by Jeanette Wolter Pearce, April 2010.
Thomas was born Abt. 1700. He died 1766 in Amelia, Virginia, USA.
Notes for Thomas Booth:
General Notes:
The location of Thomas' land was on both sides of Sweathouse Creek which runs into Deep Creek granted in 1723. Deep Creek flows a few miles north into the Appomattox River which flows eastward into the James River at Hopewell. Waterways were important to farmers because it gave them a way to transport crops and people to markets. In Prince George County (now Dinwiddie), VA 13 Oct 1727 granted 400 & 150 acres; 7 Jul 1730 he was granted a total of 2000 acres; and Patented land, 1554 acres, in Amelia Co. 1735.

Carlson Fitzhugh Booth, 8th generation, has visited Thomas' land in Amelia County. On his last visit in April 1993, he was accompanied by two other Booth's also descended from Thomas, but from a different son. According to Carlson, Thomas obtained first part of his land in 1724. He built a brick house in 1725 using bricks which came over from England as ballast in the boats. Also, the house was constructed from locally made bricks of reddish clay. On the original site, there now stands a wooden house constructed about 1840. Mr. and Mrs. Ben Haigwood (Hogwood?), who live there, hosted Carlson and his two Booth cousins.

According to deed records, Thomas was granted 1554 acres (2.4 square miles) on 29 September 1735. Another record says he patented additional land, totaling 2,000 acres (3.1 square miles). (Note: 640 acres = 1 square mile). This is a lot of land! Thomas later divided his land among his five sons. His four older sons received their shares in 1749, totaling 121 0 acres of the 1554 acres. His youngest son, John, was willed his share of 388 acres when Thomas died. Probably John was living at home with his father and working his future share.

Thomas probably grew tobacco which was the cash crop of those times and vital to the economy. He may have grown staples such as wheat and corn also.

Prince George County wills and deeds records from 1713 - 1728 list Thomas Booth several times as an appraiser of deceased men's estate inventories, This would indicate that his judgment was respected enough to be called upon to give an honest estimate. The earliest record is 1718. In 1723 and 1724, Thomas had his land surveyed by Robert Bolling, a surveyor of Prince George
County during this period. One of Bolling's records said that Thomas was of Martins Brandon Parish (of the Episcopal Church).
Surveyor Bolling also listed the performance of individual surveys in another part of Prince George County for George Booth of Surry County. These were done in 1719, 1721, and 1724 on both sides of Turkey Egg Creek, at least 12 miles from Thomas' land. (Turkey Egg Creek is shown on today's maps in present Dinwiddie County which was formed in 1752 from Prince George's County.)

It is thought that Thomas and George Booth are related, since they both had their lands within the same county surveyed about the same time by the same surveyor. In the book "Carlby," which documents the history of a manor home in Southside area, shows this relationship that George of Turkey Egg Creek was a nephew to Thomas Sr. George's (George II) father was named George, who we will call George I, who lived at Stony Creek and Sappony Creek. George III of this line actually built Carlby with his grandfathers money. "Carlby" shows a Booth family genealogy chart showing our Thomas, Sr. to have two brothers, George I and Robert. Their father is shown as another Thomas, but this line is labeled conjectural and not documented. This chart shows Thomas with no birth date, a death date of 1766 (correct), and married to "Doecorrs (Dorcas)." Of his seven children, only his son John is shown, with four more successive generations. The chart mostly shows the descendants of George I, brother of Thomas, Sr. Interestingly, then, a Thomas is mentioned several times in Amelia County's Court Order Book 1, 1735 - 1746 as either a witness, plaintiff, or juror in several cases. In one of these cases a Thomas Booth, Sr. was a witness, and a Thomas Booth, Jr. was the plaintiff. This could be father-son. Or, in those days if two unrelated people with the same name lived in same area,
people used "senior" and "junior" to designate who was oldest. Further study is needed to unravel the relationships.

This will was proved by the oaths of John Chappell and Robert Chappell, two of the witnesses whereto and at another Court held for the said County the 22nd day of June 1769 the same was sworn to by John Booth, The exor. therein named and ordered to be recorded and on the motion of the said Exor. who entered into and acknowledged bond with George Hightower his security as the law directs certificate was granted him for obtaining probate thereof in due form.
T. G. Peachy, C


Children of Thomas Booth and Dorcas: 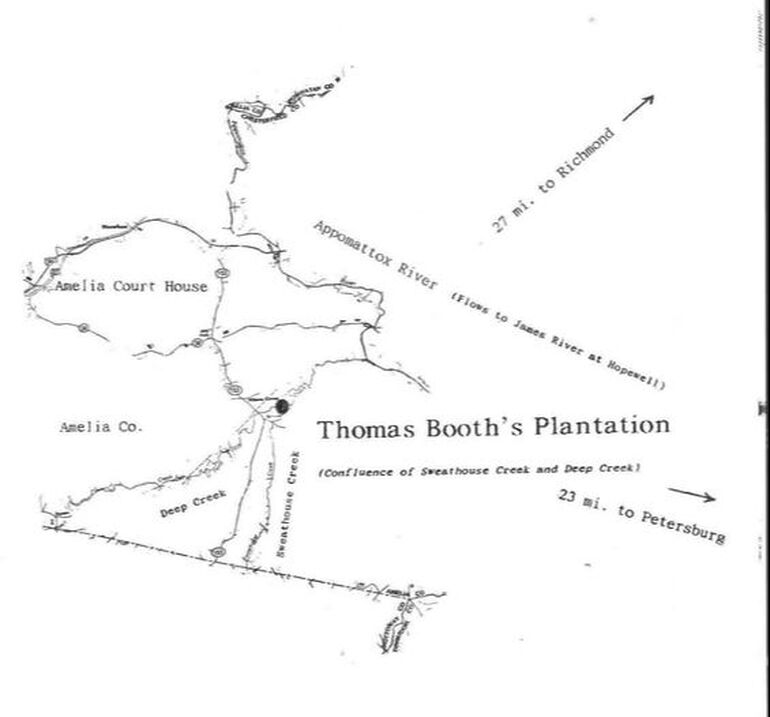