Judith McEwen
(Unk. – aft. 1814)
​The following information on Thomas and Dorcas Booth is an excerpt from the book "The Descendants of Thomas Booth of Amelia County, Virginia" compiled by Jeanette Wolter Pearce, April 2010.
​George was born Abt. 1720 in Amelia, Virginia. He was the son of Thomas Booth and Dorcas. He married Judith McEwen in 1744. Judith was the daughter of William McEwen.

Will of George Booth, Will Book 2X, page 190.
Amelia County, Virginia
IN THE NAME OF GOD: AMEN, this tenth day of December in the year of our Lord one thousand seven hundred and sixty four, I George Booth of Amelia County being very sick and weak in body but of perfect mind and memory thanks be to God for the same and knowing that it is appointed for all men once to die do make and ordain this my last will and testament that is to say principally and first of all I give and recommend my soul to the hands of God that save it; for my body, I recommend to the earth to be buried in a Christian like and decent manner at the discretion of my executors nothing doubting but at the General Resurrection I shall receive the same again by the mighty power of God and as touching such worldly estate wherewith it hath pleased God to bless me in this life I give and dispose of the same in manner and form following: I order that in the first place all my just debts to be paid then I give and bequeath unto my loving wife Judith Booth the use of my plantation whereon I now live during her natural life or widowhood she making no waste thereof and at her death or marriage I give and bequeath the said plantation with eighty acres of land belonging thereto to my son John Booth to him and his heirs forever.
Item: I give and bequeath to my son William Booth one hundred acres of land joining the
aforesaid plantation, the road and Deep Creek to him and his heirs and the remainder of this tract
of land I give and bequeath to my son David Booth joining Deep Creek at the bridge to him and
his heirs forever.
Item: I give and bequeath to my two sons Nathaniel and George my land on Sweathouse Creek
to be equally divided Nathaniel Booth to have the lower part whereon the plantation is and George to have the upper part to them and their heirs.
Item: I give to my wife Judith the use of one Negro man Jemmy and one bed and furniture two
cows and calves three dishes half a dozen plates one iron pot during her life or widowhood and
then after her death or marriage to be divided amongst my children as I shall mention.
Item: I give to my son William one Negro boy Will and no more of my Negroes. Also I give to
my son William one new bed and furniture one sorrel mare with blaze In her face and one sorrel
colt with a star In her forehead and this shall be allowed So -much of his part of my stock and
household goods.
Item: My will is that my three old Negroes, viz. Peter, Anaid and Cloe shall be kept on my
plantation to support my children till my youngest come to age or ever marriage and then to be
equally divided amongst my children as follows Ann Booth, Nathaniel Booth, George, John and
David & Elizabeth Booth and my will is that my six children have a young Negro each when they come of age or marriage suppose there be one for be they that has received it shall so much of their part of the Negroes I mean the Bid children last named. And when the youngest child comes to age or marries my desire is that all my Negroes may be equally divided amongst them as to say Ann Booth, Nathaniel Booth, George Booth, John Booth and Elizabeth Booth and my will is that my stock and household goods may be equally divided amongst all my children each to receive their part at age or marriage. I do ordain my brother William Booth and my son William Booth to be the executors Of this my last will and testament.
Witness my hand and seal day and date above written.
GEORGE BOOTH (L.S.)

Signed, sealed and delivered by the said George Booth as his last will and testament in the
presence of us - the subscribers:
Benjamin Dyson, William Harris, Absalom Creel.

At a court held for Amelia County the 23rd day of July 1767.
​
This will was proved by the oaths of William Harris and Absalom Creel, two of the witnesses
thereto sworn to by William Booth the executors within named and ordered of the said exors. Who entered Into and acknowledged bond with security as the law directs certificate was granted them for obtaining probate in due form.
Teste: T. G. Peachy, Clerk.
A copy, teste: S. L. Farrar, Jr.
Clerk of the Circuit Court of Amelia County, Virginia.
Amelia County VA - Court Order Book 2 (partial)
P 422
January 16, 1746 Court
Deed of William McEwen to George and Judith Booth, his wife
​This Indenture made the Sixteenth Day of January In the Year of our Lord One Thousand Seven Hundred and forty Six between William Markewen(sic)of the County of Amelia of the one part, and George Booth and Judith, his Wife, of the Same County of the other part. Witnessed that the Said William Markewen(sic) for and in Confirmation of the Natural Love and Affection which he beareth to the Said George Booth and Judith his Wife and for divors, other good Causes and considerations, he the Said William Markewen(sic) Hath given granted, Released and Confirmed and by those presents Doth give grant Release and Confirm unto the Said George Booth and Judith his wife and to their Heirs and assigns forever, one Certain Tract or parcel of Land containing by Estimation two hundred and fifty acres be the same more or Less lying on the North Side of Deep Creek in the Said County of Amelia Bounded as follows: Beginning at a Corner hickory on the Said Creek, Thence East Sixteen Poles to a Corner white oak, thence North to the Main Road, Thence along the Said Road according to the Several Meanders thereof to Deep Creek, Thence up Deep Creek as it Meanders to the Beginning and the Reversion, Remainder and Remainders thereof and all the Estate, Right, Title, Interest, Claim and Demand whatsoever of him, the Said William Markewen(sic), of in or to the premisses or any part thereof. To have and to Hold the Said Tract or parcel and premisses together with their and every of their appurtenances unto the Said George Booth and Judith his wife and to their Heirs and assigns for ever to the only use and behoove of them the Said George Booth and Judith his wife their heirs and assigns for ever. In Witness whereof the Said William Markewen(sic) hath hereunto Set his hand and Seal the Day and Year above Written.
Signed Sealed and Delivered In the Presence of us.
William McKewen
(SEAL)

Memorandum the Sixteenth day of January 1746 that every and -- of the within mentioned Land and Premises was made by the within Hand of William Makewen(sic) to the within Hands of George Booth and Judith his wife and to their Heirs according to the form and Effort of this Deed.

William McKewen
At a Court held for Amelia County the 16th day of January 1746.
William McKewen presented and acknowledged this his Deed with ----- and ----- Endorsed to George Booth and Judith his wife and ordered to be recorded.
Samuel Cobbs, Clerk
​ 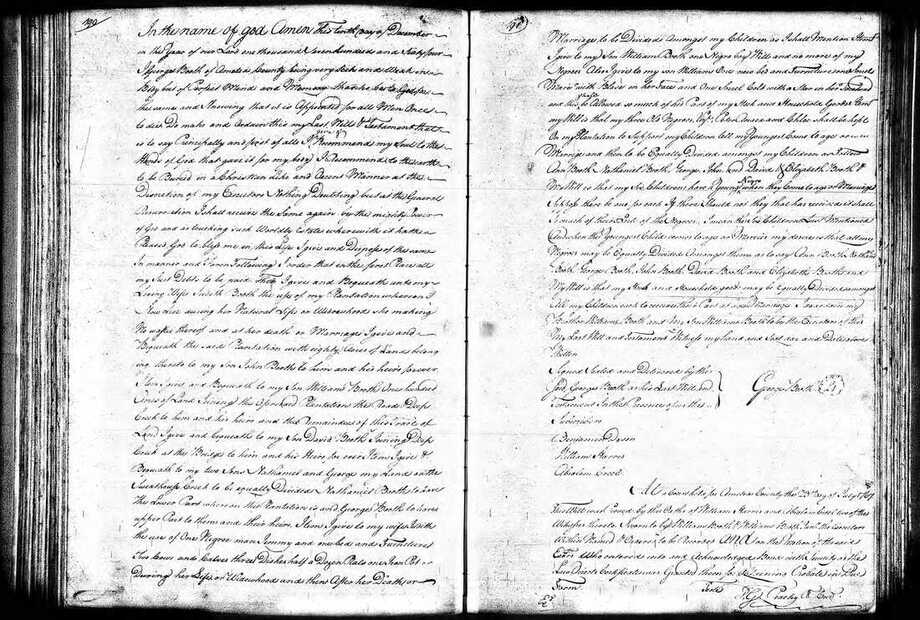