Edmund was born circa 1670 in Accomack County, Virginia. He was the son of Major Richard Bayly and Mary Jones. Edmund married Hannah Scarburgh before 1685. Hannah was the daughter of Col. Edmund Scarburgh and Ursula Whittington. It is also uncertain when Hannah died, but it had to be before 1717 due to the fact Edmund re-married in 1717 to Hannah's cousin Mary.  Mary was the daughter of Col Edmund Scarburgh's brother, Charles and Elizabeth Bennett.

Edmund's home was known as The Hermitage and was located in Craddockville, Accomack County, Virginia. Pictures and history of the home is included below.

On November 15, 1707, Edmund Bayly was named in his brother Richard Bayly Jr's will as one of the overseers.

Edmund made a will on 6 February 1718 at Accomack Co, VA.: He named a wife Mary; daughters Elizabeth Crippen and Tabitha; son Edmund (under age); and a nephew Wittington Bayly. He left all his land on the seaside containing 800 acres to his son Edmund and for want of heirs to unborn child, if a boy, but if a girl he gave 1/2 the personal estate given by this will to his son Edmund to the said child. Should his wife not be with child & his son died without issue, he gave 350 acres to his daughter Elizabeth and the remaining part of his land to his daughter Tabitha. To wife Mary all her estate that belonged to her deceased husband Charles Bayly and all legacies left her by her deceased husband. Edmund Scarburgh, Morris Shephard and Henry Scarburgh to inventory his estate. Son Edmund to be under the guide and direction of his uncle Morris Shepeard. Wife and son Edmund were executors. Witnesses were Henry Scarburgh, Morris Shepard and Seb: Cropper. Three pages of the will is included below.  Edmund's will was probated on 2 April 1718 at Accomack Co, VA. 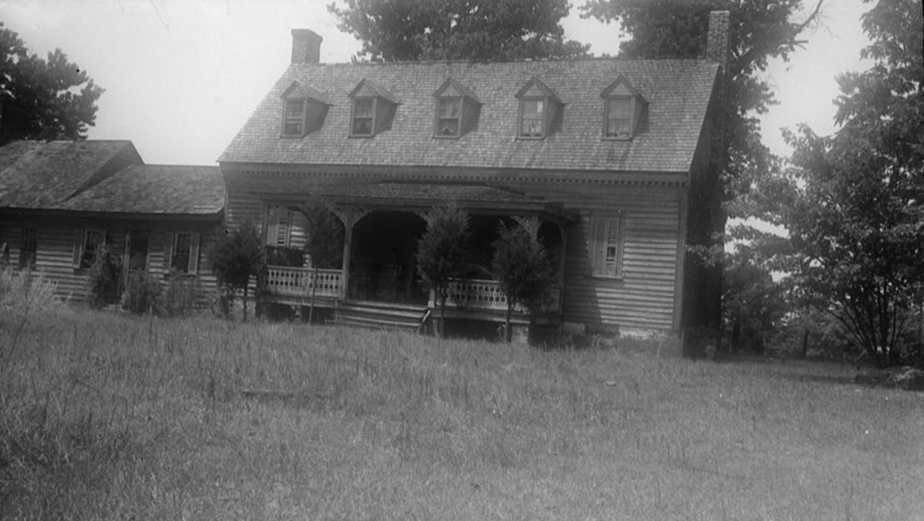 Edmund Bayly House, also known as Hermitage, is a historic home located at Craddockville, Accomack County, Virginia. It was built in two stages between 1769 and 1787, and is a 1-story, five-bay, brick-ended frame house. It has a gable roof with dormers. The interior features fine Georgian woodwork, including an impressive parlor chimney piece with flanking cupboards, and a handsome stair. Also on the property are a contributing kitchen outbuilding, renovated for use as a guest house, and a shed. It was added to the National Register of Historic Places in 1982. - Source Wikipedia 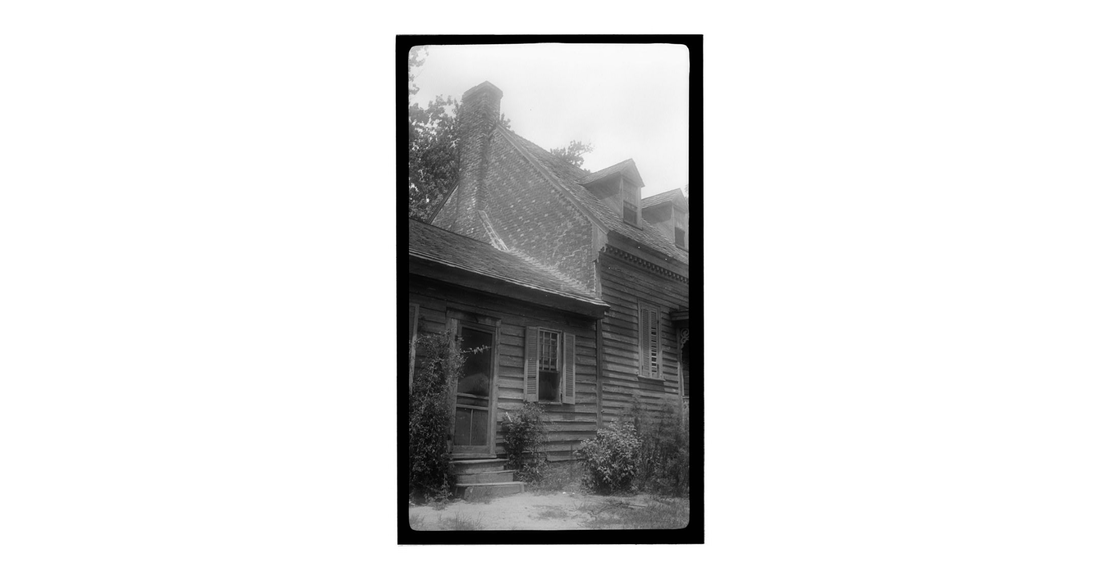 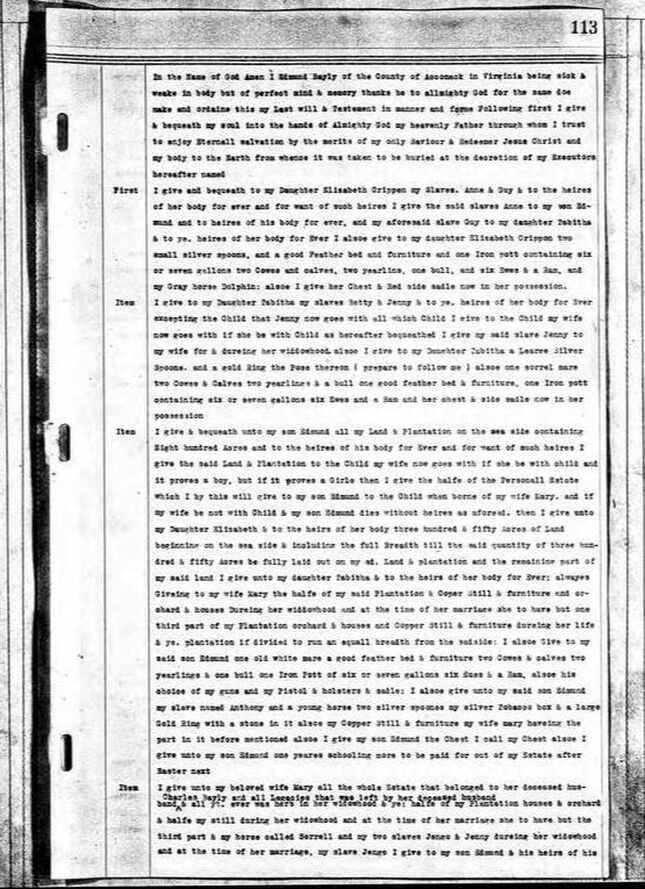 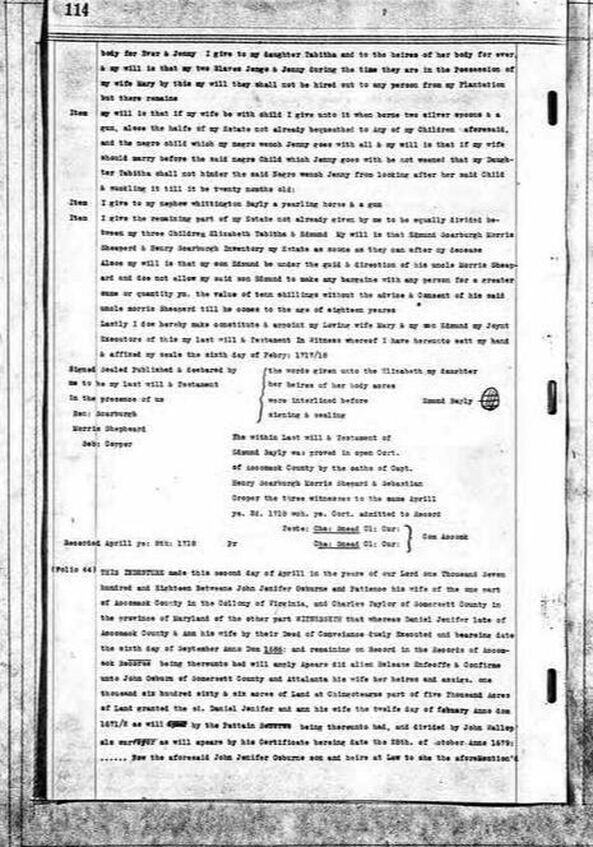 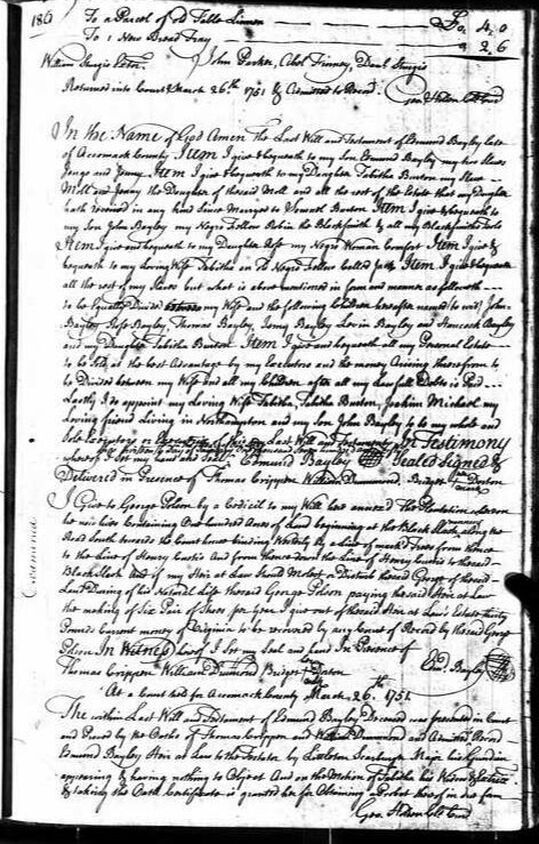