Hans Adam, along with his two brothers Johannes and Philipp, sailed from Rotterdam, Germany on the ship Two Brothers. The captain was Thomas Arnot. They sailed by way of Cowes, England which is on the Isle of Wight. They arrived in Philadelphia on August 28, 1750. Upon arrival, they took the oath of allegiance to the province and the state of Pennsylvania and was qualified on the same day. 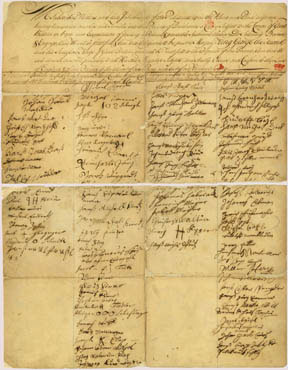 The oath stated:
“We subscribers, natives and late inhabitants of the Palatinate upon the Rhine and places adjacent, having transported ourselves and families into this province of Pennsylvania, a colony subject to the crown of Great Britain, in hopes and expectation of finding a retreat and peaceable settlement there, do solemnly promise and engage that we will be faithful and bear true allegiance to his present majesty, King George II, and his successors, kings of Great Britain, and will be faithful to the proprietors of this province, and that we will demean ourselves peaceably to all his said subjects and strictly observe and conform to laws of England and this province, to the utmost of our power.”

They would then sign their names on two pieces of paper. Since the immigrants could not speak English, they weren’t considered intelligent. When they signed their names, many did so in their own language which showed some amount of education. If they were unable to sign, an “X” was placed near their name. After signing the oath, the immigrants went back to the ship and their families.
When ships arrived from Germany, bells were ringing in the city to alert the citizens that new immigrants were in port. The citizens would go to the boat and welcome the passengers and to find indenture servants to fill their labor needs. German people already in Philadelphia would great the ship with fruit and other foods. Germans already in Philadelphia knew well what the passengers needs were. They were also looking for news from home.

German passengers carried two documents with them when they sailed. First, their passport which stated the community they were from and that they did not have any dangerous plague or infectious disease. It also stated that they owed no taxes. The second document was a letter of recommendation issued by the pastor of the immigrant’s home church. 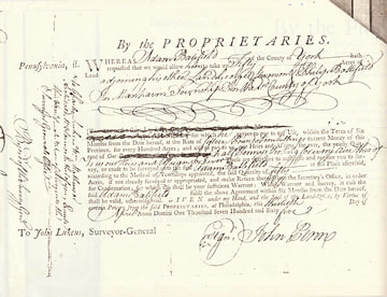 Hans Adam Battenfeld and his brother Johannes transfered their land through an agreement in 1809 to Jacob Blocher . Name of the property was Goodhope.

The following information and 2-page document was uploaded to Ancestry.com by ShirleySmith8184 on 05 Dec 2016:

Land registration was (is?) not required in PA, and may never have been recorded by Johannes or Hans Adam Battenfeld, but they transfered their land through this agreement in 1809. Name of property, GOODHOPE, probably conferred to it by the Battenfelds. Recorded in H-Vol 1-p10, Land Bureau, Harrisburg, PA

​
For information on the location in Germany where Hans Adam and his family were from click on the following links: