A. B. Birdie Daniel
Roddy was born April 11, 1841 in Waters of Thompson's Creek, Bedford County, Tennessee. He was the son of William Harris Anthony and Elizabeth Pollock.  Roddy married A. B. Birdie Daniel.  Roddy died on March 21, 1928 in Tullahoma, Coffee County, Tennessee and was buried March 22, 1928 in Maplewood, Tennessee.   Roddy was a carpenter and served as a justice of the peace.

​The following is answers Roddy Anthony provided to the authors of "The Tennessee Civil War Veterans Questionnaires"
At the time of the questionnaire, he lived in Tullahoma, Tenn. Route 1. He was 80 yr. and 10 months old. He was born on the waters of Thompson's Creek, Bedford Co., TN in 1841. He was living in Franklin Co., now part of Moore Co., TN when he enlisted in the service of the Confederacy. Before the war he was a miller and farmer. His father was a traveling minister in the Tennessee Conference. Roddy did not own any land at the start of the war. Neither his parents or himself owned any slaves. His parents owned 110 acres of land valued at $1500 when the war started. They lived in a frame house with 6 rooms. When he was young, Roddy plowed, hoed, cradled, ran a saw mill and griss mill. His father farmed when he wasn't on the preaching circuit. His mother "done" cooking, spinning, weaving cutting and making clothes. His parents did not have any servants. The community held all work with honor and high respect. All white men in the community engaged in work, none of them led lives of idleness. Roddy said that the men of the community that owned slaves did not feel better than anyone else. Slaveholders and non-slaveholders mingled on an equal basis. Everyone was sympathetic to each other. Slaves had no influence in the political process. Roddy stated that all industrious young men had to do to make something of themselves was to show an industrious will, they weren't discouraged by slaveholders. Roddy attended a public free school, the only school in the community, for 24 months "for as my memory alow". The school ran for 2 1/2 to 3 months of the year. The school was at the door until he moved away then it was 2 miles away. School was not attended regularly by the children of the community. The teacher was a man, people didn't think a woman could teach in "them" days. 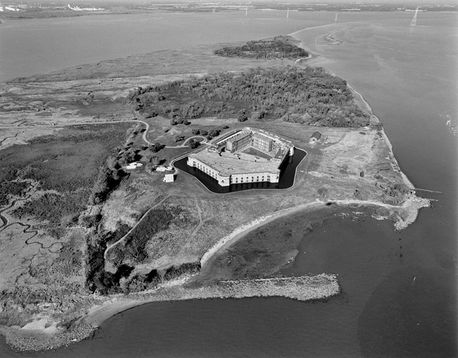 FORT DELAWARE AND PEA PATCH ISLAND. Photo taken in October, 1998.
Roddy enlisted in the Confederate army in April, 1861 in Winchester, Franklin Co., TN. He served under Peter Tuney, 1st Tennessee ("The 1st Confederate"). His company was sent to Richmond, Virginia first. It was a little over a year before they were engaged in battle, the first being the Seven Pine below Richmond. The following is Roddy's experience in the war: I lived in camp all right nothing to complain of. Very well clothed in camp. slept on our blanket some time cold some time warm had beef and flour bred had very little corn bread. Some of the boy complained of getting hungry but I never but one time when we were on our retrea[t] from Richmond to Yorktown. We had to take soldiers life in cold and disease. I was in hospital with attack of Rheumatism and Jaundice something like a month with reasonable treatment at Lynchburg Virginia (1862). I was in hospital while in prison at Fort Deleware with small pox about 40 days very roughly treated but got over it. This is my prison life in full. After the battle of Manna we went to Camp fisher on the Potomac river were were not in this battle (but) was on the battle field wintered and drilled. After Seven Pine the big battle below Richmond lasting several days. Cedar Run (in Virginia) Sharpburg, Maryland, Fredrickburg, VA., Chancelsville, VA Gettysburg, Penn. Captured there on the 3 of July 1863 placed in Fort Deleware prison till June 8, 1865 released on parole and sent home. Came on the train to Tullahoma transportation furnished free. W.A. Marshall and my self came on the same transportation from Fort Deleware home. I got home on the 10 of June.
​
After the war, Roddy was a carpenter doing cabinetry. He lived in Wartrace for 7 years. After the death of his father, he bought a place in Moore County. He attended the Methodist Church and served as a justice of the peace for two terms. He listed his father's name as William "Harris" Anthony. Brother James listed the name as William "Horace". Roddy's mother's maiden name was Elizabeth Pollock, daughter of John and Alsey Pollock who lived near Roseville in Bedford Co. He agreed with Robert that his paternal grandparents were German, living and dying in Tennessee. His stated that his mother's people came from Pennsylvania and they were from Ireland.